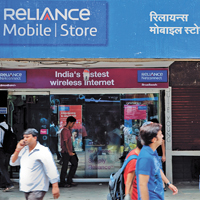 08 November, 2014
Print this article Font size -16+
Reliance Communications Ltd, India's second-biggest telecoms carrier by customers, will next year explore options to reduce its debt, including the possible sale of a stake in its mobile tower arm, its billionaire chairman said.
The company will also again attempt to list its undersea cable arm in Singapore when market conditions improve, Anil Ambani, India's seventh-richest man according to Forbes, told shareholders at the company's annual general meeting on Tuesday.

With a net debt of $6.4 billion as of June, Reliance Communications has so far been unsuccessful in its efforts to raise funds through asset sales.

A planned sale of its telecoms tower unit has dragged on for nearly two years, while the company shelved a Singapore initial public offering of its undersea cable unit in July due to weak investor appetite.

Reliance Communications said in May that talks on the sale of its tower arm were awaiting clarity in rules in India's troubled telecoms sector.

Reliance Communications shares have barely moved after hitting a record low last week. The stock is down 31 per cent on the year and has lost about 40 percent since its last annual general meeting.