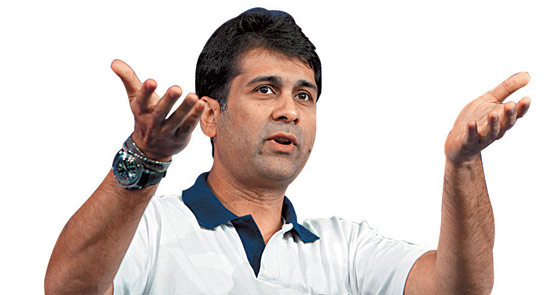 08 November, 2014
Print this article Font size -16+
Why should I gamble with the interests of my employees? They are entitled to get real money”
— Rajiv Bajaj, MD of Bajaj Auto, on the demand for ESOPs by striking workers at Bajaj Auto’s Chakan plant near Pune

“It is only computer analysis of patterns of calls and emails that are being sent. It is not actually snooping”
— Salman Khurshid, external affairs minister, on US surveillance activities

“This is a craven statement of a craven minister of a craven government”
— Brinda Karat, CPM politburo member, on the external affairs minister’s defence of the US surveillance programme

“We don’t ask the Europeans to  be polygamists”
— Macky Sall, president of Senegal, responding to international criticism of his country’s criminalisation of homosexuality

“...nobody ever gave up anyone to us”
— Vladimir Putin, president of Russia, on extraditing Edward Snowden,  who blew the whistle on the PRISM spying project, to the US

“Those opposing the deal are long on politics and short on facts”
— Ajit Singh, civil aviation minister, on the Jet-Etihad deal

“It’s a thousand times better to be a Rambo than be a dumbo or a scambo”
— Meenakshi Lekhi, spokesperson of the BJP, taking a dig at the Congress for deriding Narendra Modi’s role in the Uttarakhand rescue effort
“ANA looked like one sexy woman... when we got to bed, it was a horrible experience. So we had a quick divorce”
— Tony Fernandes, group CEO, AirAsia, on his failed joint venture with Japanese aviation firm ANA Holdings