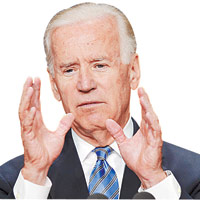 08 November, 2014
Print this article Font size -16+
“I can think of at least half a dozen people who I wish had a psychiatrist for a wife”
— Joe Biden, vice-president of the US

“The Maoists, with assistance from the CPM, had planned to kill me”
— Mamata Banerjee, chief minister of West Bengal

“I don’t think we should fool ourselves. This is G7, plus one”
— Stephen Harper, Prime Minister of Canada, on Russia’s continued support to the Syrian government, before a meeting of the G8 nations on the Syrian crisis

“People don’t become OBC leaders simply because they are born into a backward caste”
— Nitish Kumar, chief minister of Bihar, taking a dig at Narendra Modi being projected as a leader of the backward classes

“I don’t pay a lot of attention, frankly, to what Barack Obama says”
— Dick Cheney, former US vice-president

“...I say let Allah sort it out”
— Sarah Palin, former governor of Alaska, on the civil war in Syria

“His (Narendra Modi) magic only works on television and in Gujarat”
— Akhilesh Yadav, chief minister of UP