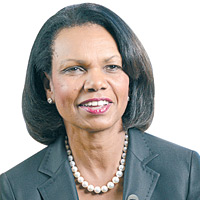 08 November, 2014
Print this article Font size -16+
“Our country has a history of overcoming our prejudices, overcoming our difficult past. And (playing) golf is a part of that.”
— Condoleezza Rice, former US secretary of state

“I am not a politician. I am an apolitical person.”
— Narendra Modi, chief minister of Gujarat

“She also happens to be, by far, the best looking attorney general.”
— Barack Obama, US President, on Kamala Harris, California’s attorney general; the remark has got caught in a ‘sexism’ row

“I am back from my vanvaas (exile). Earlier, I approached the business with guts and instinct; now, I am working with balance and wisdom.”
— Kishore Biyani, chairman Future Group, to a newspaper

“Germany must accept euro bonds or leave euro.”
— George Soros, billionaire investor, in an article for a German magazine