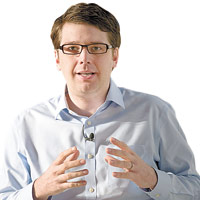 08 November, 2014
Print this article Font size -16+
“We’re still this toddler in a grown man’s body in many ways”
—Andrew Mason, chief executive, Groupon Inc, at an employee meeting, stressing on the need for the daily deals site to grow

“There is no simple recipe for appropriate policy”
—Janet Yellen, chairman, Federal Reserve, calling for a ‘pragmatic’ approach to US monetary policy at the Fed’s annual central banking conference

“We bit off way too much, too early,”
—John Mulligan, chief financial officer, Target, in a frank assessment of the company’s aggressive foray into Canada that resulted in weak second quarter results

“Today, wealthy Indians are finding it cheaper to get their children married in Thailand than in Indian hotels. It’s a hard reality”
—Arun Jaitley, finance minister, criticising the existing higher taxation on the tourism sector that has led to fewer visitors and lower revenue collection

“Being a software superpower, India should now emerge as a global factory”
—B.D. Park, president and CEO, Samsung South-west Asia, on how India is set to become the next global factory as China is losing its competitive edge

“More and more you use an application on your phone and the Web to interact with us, the future of call centre jobs will be less. In reality, these jobs will not exist in five years”
—David Thodey, CEO, Telstra, at a conference