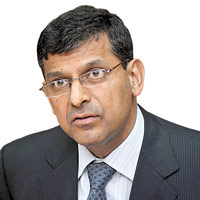 08 November, 2014
Print this article Font size -16+
If it is not paid today, it won’t be tomorrow.
Focus on putting the asset back on track”
Raghuram Rajan, governor, RBI, in response to bankers asking him to be lenient when categorising bad loans

“The IMF, of late, has been extremely generous in its suggestions on what we should do or not do”
Mario Draghi, president, European Central Bank, retorting to IMF’s advice to the ECB on quick implementation of quantitative easing in the euro zone
“We do say what we have to say when we think that it’s appropriate to say it”
Christine Lagarde, director, IMF, in response to the ECB president’s retort to the IMF’s suggestions

“It’s a marathon, not a sprint”
Rajiv Lall, chairman, IDFC, on building IDFC Bank, after being granted a licence by RBI

“Daiichi failed to harness the strong generics business”
Malvinder Singh, former promoter of Ranbaxy, which was sold by Daiichi to Sun Pharma recently

“In principle, there is nothing impossible — you can switch from dollars to euros and from euros, in principle, to roubles (for international trade)”
Alexander Dyukov, CEO, Gazprom Neft, threatening the West over continuing with its sanctions on Russia, imposed after the annexation of Crimea

“India is more of a do-it-for-me market”
Rajiv Sodhi, MD, GoDaddy, on the attitude of Indian
businesses to an online presence