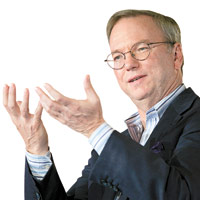 08 November, 2014
Print this article Font size -16+
At Google, the biggest mistake I (have) made was not anticipating the rise of the social networking phenomenon”
— Eric Schmidt, executive chairman, Google

“... we are getting a person imposed from above to be an MP, who has not done grassroots work, not been around, who a particular party is trying to parachute here.”
— Mohandas Pai, former CFO of Infosys, on the possibility of Nandan Nilekani, former CEO of Infosys, fighting Lok Sabha elections from Bangalore on a Congress ticket

“We took the resolute measure of removing the factionalists lurking in the Party”
— Kim Jong Un, dictator of North Korea, on the execution of his uncle and advisor Jang Song Thaek

“The richest man in the world, who is among the most powerful people in technology, has no ego”
— Gurdeep Singh Pall, global head, Skype, referring to Bill Gates

“We’ve been doing this (for) 200 years. We’re not going to stop and start every time the company has a problem”
— Jamie Dimon, CEO, JPMorgan Chase. The bank has run into trouble with US federal regulators

“We can’t afford any improvements until you learn to save money and start making money”
— Lakshmi Niwas Mittal, at a meeting with the managers of ArcelorMittal Temirtau plant in Kazakhstan

“If militarism is like the haunting Voldemort of Japan, the Yasukuni Shrine in Tokyo is a kind of horcrux, representing the darkest parts of that nation’s soul”
— Liu Xiaoming, Chinese ambassador to the UK, in an article. The shrine is dedicated to Japanese soldiers who lost their lives in various wars