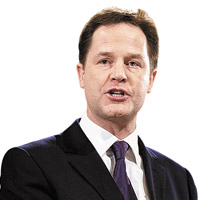 08 November, 2014
Print this article Font size -16+
I think it would also, in many ways, impoverish the European Union”
Nick Clegg, deputy prime minister of the UK, on the consequences of the UK leaving the EU

“I drank too much, I smoked some crack some time. What can I say? I made a mistake, I’m human”
Rob Ford, mayor of Toronto, in a television interview

“First, they try to block you; second, they try to infiltrate you; and third, you win. I really think that’s
how it works. Because the power has shifted”
Eric Schmidt, executive chairman, Google, on Internet censorship, in a lecture at Johns Hopkins University

“A tea-seller is a better person than those who sell the country”
Narendra Modi, responding to a Samajwadi Party politician who derided him over his past as a tea vendor

“I don’t trust them and they don’t trust me”
Hamid Karzai, President of Afghanistan, at a political meet, referring to the US
“Thank you for helping try to find me work”
Steve Ballmer, the outgoing CEO of Microsoft, to a shareholder who asked him if he would want to become the secretary of information technology

“China is doing exascale and petascale computing. I am fighting with the government to invest money in computing”
C.N.R. Rao, Bharat Ratna awardee and eminent scientist