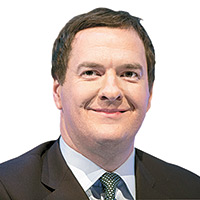 08 November, 2014
Print this article Font size -16+
We’ve really got to up our game”
George Osborne, Britain’s chancellor of the exchequer, after his China visit. The country’s progress ‘staggered’ him

“If it’s growing like a weed, it’s a good chance that it’s weed”
Mark Zandi, chief economist at Moody’s Analytics, on growth in highly leveraged loans

“I do not want to comment on statements made by Sheikh Chilli (daydreamer)”
Sriprakash Jaiswal, coal minister, responding to P.C. Parakh’s statement

“There is K.M. Birla who made the representation, he is one conspirator. I, who examined the case and made a recommendation, I can be another conspirator and the Prime Minister, who as the coal minister, took the final decision, is the third conspirator”
P.C. Parakh, former coal secretary, on the coal block allocation controversy
“Our competition is different... they’re confused”
Tim Cook, Apple CEO, taking a dig at Microsoft’s hybrid devices, at an Apple event

“India and China’s is the most important bilateral friendship in the world”
Li Keqiang, Chinese premier, during the visit by Prime Minister Manmohan Singh

“There are more people who go hungry in Madhya Pradesh than in Africa”
Rahul Gandhi, Congress vice-president, at a rally

“India cannot become just like Russia, where investors are not prepared to go and billionaires are put behind bars”
Veerappa Moily,  oil minister, on the FIR against industrialist K.M. Birla in the coal scam, just before the Prime Minister’s Russia visit