Punjab, Haryana Cotton Output To Fall 40 Per Cent Due To Pest Attack

With whitefly-pest attack causing extensive damage to cotton in Punjab and Haryana, the combined output of this cash crop in both states is estimated to dip by 40 per cent. 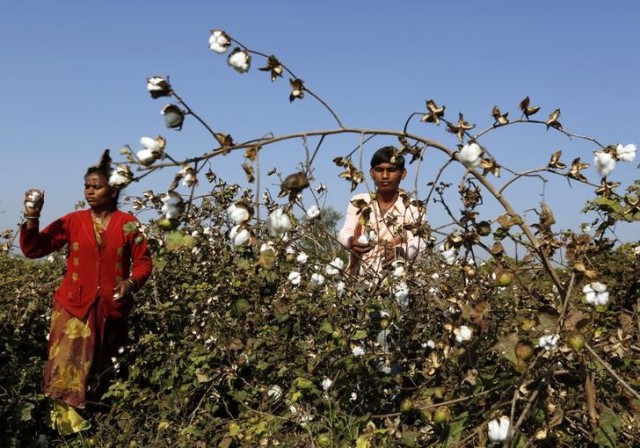 12 October, 2015
Print this article Font size -16+
"There is going to be a substantial decline in cotton output in Punjab and Haryana as the crop has been damaged extensively by whitefly attack," Indian Cotton Association Limited President Mahesh Sharda said.
This is the first major pest infestation since the country adopted genetically modified (GM) cotton in 2002, raising concerns over the vulnerability of the lab-grown seeds that yield nearly all of the cotton in the world's top producer.
India grows cotton on 11-12 million hectares and nearly 95 per cent is GM cotton.
The combined output of cotton in Punjab and Haryana is expected to be 2.2 million bales as against 3.9 million bales last season, which will be over 40 per cent less.
Cotton output in Punjab is estimated to be about 700,000 bales as against production of 1.4 million bales in last season.
Similarly, cotton production is likely to be about 1.5 million bales in neighbouring Haryana compared with last season's output of about 2.5 million bales, Sharda said.
"We sprayed different kinds of pesticides but none of them worked," said Ashok Dhaka, a Punjab cotton farmer.
The impact of whitefly attack on cotton is visible on crop arrivals in mandis. "So far we have arrivals of 85,000 bales which includes cotton from Punjab, Haryana and lower parts of Rajasthan) as against 1.35 lakh bales arrived in corresponding period of last year," he said.
"In Sirsa (Haryana) mandi, the current cotton arrivals are 500-600 bales per day whereas we received 3,000 bales per day in corresponding period of last year," Haryana Cotton Ginners Association President Sushil Mittal said.
In Punjab, 136,000 hectares out of total 450,000 hectares of cotton acreage was damaged by whitefly attack. In Haryana, out of 583,000 hectares, 306,000 hectares was in the grip of pest attack.
The heavy damage in cotton crop has even forced the farmers to resort to 'Rail Roko' (train blockade) protest in Punjab as eight farmers' outfits have been squatting on rail tracks to press the state government for higher compensation for crop loss in the state.
Despite extensive cotton damage, problems for growers may not end as cotton prices are unlikely to remain on higher side in view of depressed prices of yarn and "poor" health of spinning mills, industry insiders said.
Raw cotton is fetching at present Rs 3,475 per maund (37.32 kg) in Punjab as against Rs 3,550 per maund last year.
Notably, last season cotton farmers received shock as they got prices in the range of Rs 3,900 to 4,600 per quintal as against their expectation of more than Rs 5,000 per quintal.
Debate Over GM Crops
The pest attack is inflaming debate over the usage of GM crops.
Bt cotton was tweaked by scientists at Monsanto to produce its own insecticide to kill pests like bollworms. But two years of drought have encouraged the spread of whitefly against which the strain has no resistance. The winged pest damages the leaves of the cotton plant by sucking out fluid.
"Bt technology is effective only against specific types of bollworms that are known to cause maximum yield loss and economic damage to the cotton crop," said a spokesman for Mahyco Monsanto Biotech (India) Pvt. Ltd.
The joint venture between India's Mahyco and a local unit of Monsanto has sub-licensed production of its Bt cotton strains - first approved for sale in India in 2002 - to 28 seed companies.
"Currently there are no approved agriculture biotechnology solutions to counter the infestation of whiteflies. The recommended solution for farmers is spraying of approved pesticides."
The Bt seeds cost more than older cotton strains and must be bought new each year by farmers. The companies that market the GM cotton say growers end up better off because they get higher yields and save money on pesticides, but some farmer groups are concerned about growing dependency on the new varieties.
The farmers' union allied to Prime Minister Narendra Modi's ruling party is stepping up its opposition: It wants Bt cotton banned and is trying to block the introduction of crops like GM mustard - an oilseed - now in development.
"We have been telling the government to conduct tests on all GM seeds before they are sold in the market," said Mohini Mohan Mishra, general secretary of Bharatiya Kisan Sangh, or Indian Farmers Union.
A team of scientists and government officials had visited Punjab and Haryana to help contain the pest attack and there had been no reports of outbreaks in other parts of the country.
The Punjab government has already earmarked 6.4 billion rupees ($100 million) to compensate for crop damage and an official in Haryana's farm ministry said the state was also considering compensation.
"There are reports of the pest attack in some areas of Punjab and Haryana, where about a dozen farmers have reportedly committed suicide," said a Punjabi official who spoke on condition of anonymity.
(Agencies)
Tags assigned to this article:
Indian Cotton Association Limited Mahesh Sharda cotton genetically modified agriculture punjab haryana rajasthan Bharatiya Kisan Sangh mahyco monsanto