Property Rally Not Over, Mumbai At Risk 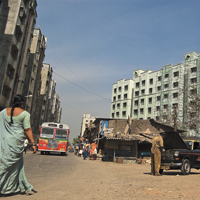 House prices in India, which have more than doubled in the past five years, will keep rising this year even as the economy slows although prices in the country's financial capital, Mumbai, look ripe for a fall, a Reuters poll showed on 31 July.The first such survey of 19 property market analysts, consultants, developers and data firms taken over the past few weeks pointed to a median 7.5 per cent rise for house prices this year in Asia's third largest economy.This comes despite a slowdown in home sales and a rapid deceleration in economic growth to 5.3 per cent at the latest read, its weakest in nearly a decade, from a nearly 10 per cent pace before the global financial crisis in 2008.Yet the expectation for price rises in cities such as Mumbai coincides with some of the strongest conclusions ever in Reuters housing market polls worldwide that a property market is overvalued.That includes Reuters polls taken before the historic US housing market crash sent prices plummeting by more than a third and triggered the financial crisis."There is no demand, there are no fundamentals to these prices," said Pankaj Kapoor, founder and managing director at Liases Foras, a real estate research firm in Mumbai."(In Mumbai) sales have continuously been going down. It has 37 to 40 months of inventory lying in the market. No efficient market can maintain more than eight months of inventory."But there appears to be little hope for prospective homebuyers in a market which analysts rate as too expensive in the urban centres of Delhi and Mumbai but that is still being driven by widespread expectations for hefty capital gains.Developers, who had reaped profits off a booming market, say relatively high borrowing costs and an average 30 per cent rise in the cost of cement, steel and labour over the last few years, stops them from lowering prices.In addition, some analysts say, speculators with deep pockets act as a buffer, preventing prices from falling or even levelling off and also shutting out many buyers who just need a home.Inventory OverhangIndia has led the list of top-performing housing markets globally with a 284 per cent real rise in prices since 2001, which is equivalent to an average annual rise of 14 percent, according to the Lloyds TSB International Global Housing Market Review.Though trends vary by city, prices in most Indian urban centres have doubled since the property market boom began in 2006-07, driven by growing numbers of middle class Indians looking to invest in real estate as well as speculators.But prospective home buyers are being held back by a slowing domestic economy and great uncertainty across the globe."Although in nominal terms house prices are expected to rise, once you adjust for inflation, which is more than 7 percent, prices in real terms are stagnant," said Samantak Das, director of research and advisory at consultant Knight Frank."The economic situation in India and abroad is not giving enough confidence to homebuyers, who feel it is better to wait and watch."The Reserve Bank of India left its key repo rate steady at 8 per cent on Tuesday. But it cut its growth outlook and raised inflation expectations, suggesting it will move cautiously on rates in the near term.Interest rates on home loans, which range from 10 to 14 per cent, will probably not fall any time soon either.With prices rising and buyers required to pay around 25 per cent of the total cost of the house as a down payment, it has become increasingly difficult to buy a house.In Delhi and its surrounding National Capital Region (NCR) that includes Gurgaon and Noida, average house prices are expected to rise by at least 7 per cent this year, even though demand for homes has fallen significantly over the last year.Sales in Delhi and NCR are down 20 per cent in 2011 from a year earlier, according to consultant Jones Lang LaSalle India's Real Estate Intelligence Services."Older stock is not selling and there is a huge inventory overhang," said Sachin Sandhir, managing director for the Royal Institute of Chartered Surveyors in South Asia."Unavailability of land, delays in project approvals and low floor space index (FSI) norms are constraining supply in certain markets, thereby affecting the ability of prices to settle at a more rational level."Unlike China, which has adopted a slew of measures to cool its once red-hot property markets India still lacks regulation to stem price rise and tackle the shortage of affordable housing for its burgeoning urban population.Prohibitively ExpensiveRespondents overwhelmingly said Mumbai property prices were highly overvalued. They gave Mumbai property an overall rating of '8.5' on a 10-point scale where '1' is very undervalued, and '10' extremely overvalued.Half of the respondents rated it a '9' or '10', compelling evidence of house prices being prohibitively expensive. This is the strongest conclusion seen in any Reuters housing market poll, even those taken before the crash in the U.S.Mumbai, where a 2,000 square foot flat in the city's posh southern district can cost more than $3 million, the same as a two-bedroom flat in central London, has seen home sales slide by 45 percent from a year earlier.Eight of 18 analysts in the poll see average Mumbai prices rising, eight see them falling and two expected no change. One respondent said Mumbai house prices will plummet more than 20 percent this year.Mumbai was top choice for city most likely to experience the steepest price fall, with a median 12.5 percent drop expected this year."As the city is grappling with drastic fall in the transactions with reduced funding options, the price correction is the only option left with the developers," said Sanjay Kumar Agarwal, general manager at CARE Ratings in Mumbai.However, it will be some time before this will make housing affordable for the majority of working class citizens. More than half of Mumbai and its suburbs' population of more than 15 million resides in slums.Respondents rated Delhi a 7.5 and NCR a 7.0 on a similar scale of relative expense. Residents in these industrial towns on the outskirts of Delhi struggle with eight hour power cuts and water shortage in the scorching summer as the existing infrastructure proves inadequate.(Reuters)