Prometheus Of The Poor 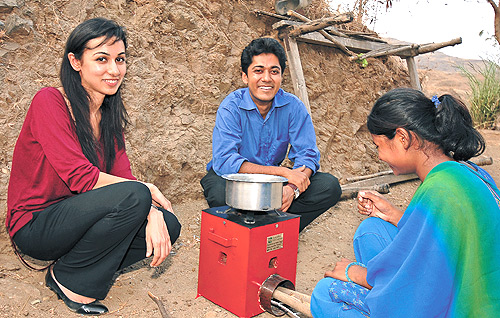 The Business Model
Rural households and the urban poor — who do not have access to LPG for cooking and safe drinking water — are Greenway Grameen's typical customers. "These households depend on farming or labour for their livelihood," says Juneja, who earlier interned with Tata Administrative Services and was also a co-founder at climate change consultancy Greenway Ecodevelopment. Apart from Juneja, a management postgraduate from FMS, Delhi, and Mathur, an IIM Ahmedabad alumnus, the company's management team also includes Michael Piotrowski, a postgraduate in engineering from EPF, Paris, and Karthik Ramesh, an engineering graduate from IIT Bombay.

In three months, the company has sold about 300 stoves priced at Rs 950 each, including tax. The product has an inbuilt margin, though it is nominal. The company doesn't sell products on credit and is looking to arrange finance for consumers through microfinance companies. The promising part is their order book of another 6,000 stoves. According to Juneja, the delivery will be completed before mid-August. Also, they have started getting enquiries from Africa and Bangladesh.

The size of the market in which Greenway Grameen operates is over Rs 10,000 crore now, says the company. About 160 million households in India have mud chulhas. LPG penetration in rural India is less than 13 per cent.  "This situation creates an opportunity for the company," she Juneja.

The Outlook
The company expects revenues to double by March 2012; by fiscal 2013-14, it is targeting Rs 25 crore. While the stove is in hot demand, the two 26-year-old founders of Greenway Grameen focus more on the research and development of new products and creating networks for marketing. Since the company does not have any facilities for research, it has tied up with fabricators and laboratories. "We develop products and projects targeted towards fulfilling rural infrastructural needs through strong networks and extensive reach. We focus on ‘high immediate impact' solutions," says Mathur, who earlier had a stint at Accenture.

The next product on the cards is a waste-heat electricity generator, which will be launched in a few months, says Juneja. Other products in the pipeline include point-of-use water purifiers and sanitary napkins. Besides, the company offers services such as agro-forestry on barren lands and ground water fluoride removal systems.

For Juneja and Mathur, the past few months have also been a period of learning and fine-tuning the business model. Unlike in the past when they discussed a new idea every day, their focus is much sharper now — create one product and then think about the other. At one point, they were more focused on product design, but now they also realise the importance of marketing. To that end, they have created a network of users. "The villagers who buy our products later become marketing agents," says Juneja. "It is a revenue earning method for them. We build the network of our customers for reaching new people cautiously."

Expansion plans this year include a contract for manufacturing 50,000 cooking stoves. A self-owned manufacturing unit for cooking stoves and an assembly unit for water purifiers is expected to come up next fiscal in Ludhiana. The founders think they have a winning proposition on their hands with their two products. The metallic stove addresses the issue of high fuel consumption and harmful emissions from traditional mud chulhas. Likewise, the water purifier will ensure safe drinking water as per WHO standards.

Apart from rural households, the company's customers now include government agencies, NGOs and companies engaged in community development initiatives. That should keep the stove burning.