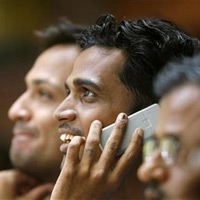 08 November, 2014
Print this article Font size -16+
The BSE Sensex is down 0.1 per cent, while the Nifty is nearly flat on profit-taking after hitting record highs on Tuesday (13 May) on exit polls that showed the Bharatiya Janata Party and its allies winning a majority in the elections.

The Nifty has gained more than 20 per cent since 13 September when Narendra Modi was named as BJP's prime ministerial candidate.

Oil and Natural Gas Corp Ltd falls 1.02 per cent, while Maruti Suzuki India Ltd is down 0.55 per cent.

Shares also showing signs of being technically overbought as the Nifty trades above all short and long-term price averages, Bollinger bands and their relative strength index is above 75 level.