New Delhi [India], September 4 (ANI): The death of actor Sushant Singh Rajput has been a big blow for the cinema industry, making space for the outbreak of several narratives related to the image of the entertainment industry.
To address the point, the Producers Guild of India on Friday issued an open statement on Twitter highlighting the "relentless attacks" of painting a false image of the Indian film industry's reputation. 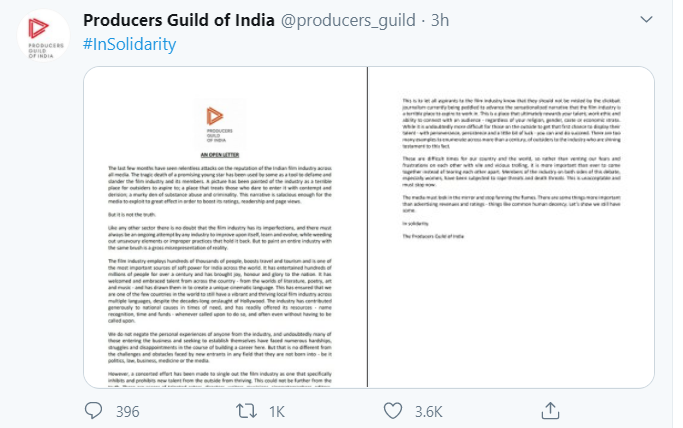 The Guild in the statement noted that the "tragic death of a promising young star has been used by some as a tool to defame and slander the film industry and its members."
The organisation explained that the picture painted of the industry as a "terrible place for outsiders to aspire to, a place that threatens those who dare to enter it with contempt and derision; a murky den of substance abuse and criminality" was not the truth.
The film industry has its "imperfections", accepted Guild in the statement. However, they stated that like any other sector, there is an ongoing attempt to improve and that to "paint an entire industry with the same brush is a gross misrepresentation of reality".
Highlighting the positive sides of the industry, the Guild pointed: "The film industry employs hundreds of thousands of people, boosts travel and tourism, and is one of the most important sources of soft power for India across the world. It has entertained hundreds of millions of people for over a century and has brought joy, honour, and glory to the nation. It has welcomed and embraced talent from across the country-- from the worlds of literature, poetry, art, and music-- and has drawn them in to create a unique cinematic language."
"This has ensured that we are one of the few countries in the world to still have a vibrant and thriving local film industry across multiple languages, despite the decades-long onslaught of Hollywood," the statement read.
The industry has contributed generously to "national causes in times of need, and has readily offered its resources name, recognition, time and funds whenever called upon to do so, and often even without having to be called upon".
Hinting at the nepotism theory, the Guild clarified: "Being born into the industry most definitely affords you the privilege of access and a first break, but after that, it is up to each individual's talent, hard work and drives to propel them forward."
They continued the statement by addressing to "come together instead of tearing each other apart."
Members of the industry on both sides of this debate, especially women, have been subjected to rape threats and death threats. This is unacceptable and must stop now," the statement said.
Upon the issue of the open letter, many Bollywood actors, including Sonam Kapoor, Farhan Akhtar, Sonakshi Sinha, Genelia Deshmukh, Vir Das, producer Nikkhil Advani, director Zoya Akhtar, and many others have shown in their solidarity with the views put forward by the Producers Guild of India. (ANI)