"President Kovind boards the Air India One- B777 aircraft for the inaugural flight to Chennai. The President will be visiting Tirupati, Andhra Pradesh to offer prayers at the Sri Venkateswara Swamy Temple," the office of the President of India tweeted. President Ram Nath Kovind on Tuesday boarded the first flight of the Air India One - B777 aircraft for Chennai for his visit to the Venkateswara Swamy Temple in Tirupati in Andhra Pradesh.

President Kovind, accompanied by his wife Savita Kovind, will reach Tirupati airport at Renigunta at 10.30 am today.

"President Kovind boards the Air India One- B777 aircraft for the inaugural flight to Chennai. The President will be visiting Tirupati, Andhra Pradesh to offer prayers at the Sri Venkateswara Swamy Temple," the office of the President of India tweeted.

The President commended the pilots, crew members and the entire team of Air India and Indian Air Force (IAF) for operating the state-of-the-art aircraft and facilitating VVIP movements within the country and on state visits abroad. 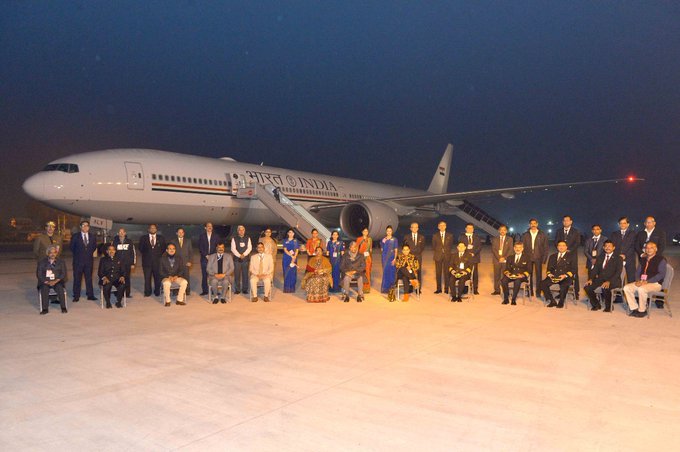 "This is the first flight of the Air India One - B777 aircraft with the Head of State on board. The aircraft is fuel-efficient and has longer range than the B747-400 that are deployed for similar VVIP operations. The aircraft has state-of-art interiors with reduced noise levels," Ajay Kumar Singh, Press Secretary to the President said in a statement.

Air India One aircraft is exclusively meant for the President, Vice President and Prime Minister.

The aircraft are equipped with an advanced and secured communication system that allows availing audio and video communication functions mid-air without any worries of hacking or being taped, sources familiar with the details told ANI earlier.

The VVIP aircraft B-777 is a replacement of wide-body aircraft Boeing B-747 jumbo aircraft whose call sign is Air India One.

The new Boeing 777 aircraft for VVIPs guest is also equipped with advanced defence systems and will be operated fully by IAF pilots in due course of time.

After his arrival, President Kovind is scheduled to visit the Tiruchanur Sri Padmavati temple. From there he will go to the guest house at Tirumala at 12.15 pm.

The President will visit the Varaha Swami Temple and Lord Balaji temple at 12.50 pm.

At 3 pm, he will leave Tirumala to depart for Ahmedabad.