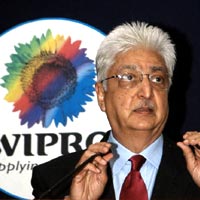 08 November, 2014
Print this article Font size -16+
Azim Premji has put his money where his words are. On 22 February, 2013, the billionaire chairman of Wipro transferred nearly 300 million equity shares of Wipro Ltd, valued at Rs 12,300 crore, held by entities controlled by him to an irrevocable trust. This follows his announcement on 19 February where he said he will commit more of his wealth to philanthropy, as his Foundation scales up work to improve equity and quality of the primary education system in the country.

According to a press release from the Azim Premji Foundation, Premji has transferred 295.5 million shares, representing 12 per cent of the total shares of Wipro, towards the trust. "With this transfer the trust's shareholding in Wipro will go up to about 19.93 per cent," the release said.

As a result, the trust's shareholding in the company has increased to 19.93 per cent, including 7.93 per cent of shares transferred in 2010 when the trust was set up.

Earlier this month, talking to The Times, UK, Premji had attacked the growing tendency towards conspicuous consumption among his country’s business elite, saying that some of the excesses were repugnant in a nation of such poverty.

He also had been the only one among India's mega rich to support Finance Minister P Chiadambaram when he raised the issue of extra tax on India's super rich.
Super Tax For The Super Rich?
The Divide & Grow Policy
The trust will utilise the endowment to fund various social initiatives of the Azim Premji Foundation, a not-for-profit organisation he set up in 2001, with a view to contributing to a just, equitable, humane and sustainable society in India.

"The initiatives are expected to scale significantly over the next few years," the Foundation said in a statement in Bangalore.

Premji, 67, had in the past donated about Rs 9,000 crore to improve school education system in India through his foundation. He is the third-richest Indian and one of the 50 richest in the world with a total wealth of $16 billion, or about 87,000 crore, according to the Bloomberg Billionaires' Index.

The Foundation works in rural India in partnership with state governments to help improve the quality and equity of school education.

In a letter for the first international "Giving Pledge", group, Premji said on 19 February the Foundation currently has 800 people spread across the country: most of whom are working for the betterment of some of the most disadvantaged regions of the country, and others at the Azim Premji University here.

"The Foundation plans to scale up to 4000-5000 people over the next five years", Premji said. "The developments of the past two years have given me confidence in our scaled up and institutional strategy.

Even as we execute this strategy, I am aware that ensuring stable funding source is critical for its success. I am committed to transferring more of my wealth to scale up the Endowment of the Foundation," he said.

"I strongly believe that those of us who are privileged to have wealth should contribute significantly to try and create a better world for the millions who are far less privileged. I will continue to act on this belief," Premji added.

The business tycoon is also the first Indian to sign up for the Giving Pledge, a US-based organisation that encourages the world's wealthiest men and women to donate a majority of their wealth for charity. On Friday, Wipro's shares closed at Rs 415.55, up by 2.4 per cent on the Bombay Stock Exchange.
Tags assigned to this article:
news 8 azim premji philanthropy wipro ltd azim premji foundation social initiatives conspicuous consumption primary education education system profit organisation