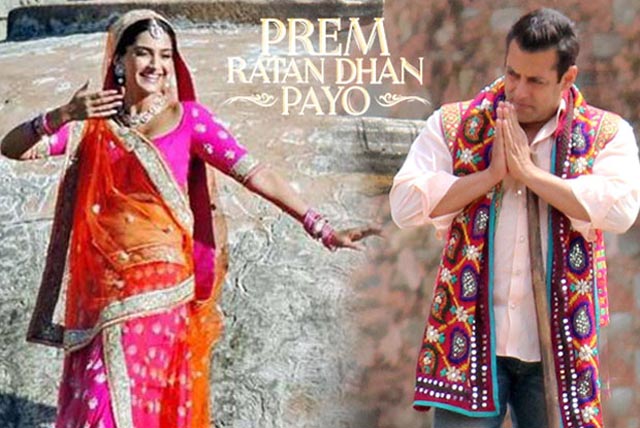 17 November, 2015
Print this article Font size -16+
As reported in our earlier story, Salman Khan and Sonam Kapoor's film Prem Ratan Dhan Payo (PRDP) has managed to outshine the box-office collection record for all previous Salman Khan releases. The film, which was released over 5,300 screens on November 12 has managed to rake in big moolah. The film has earned Rs 71.38 crore after two days according to veteran film trade analyst Taran Adarsh. In fact, Salman has beaten his own record at the box office which has now become the biggest Bollywood film to have opened in 2015. Salman's last release - Bajrangi Bhaijaan - had earned Rs 63.75 crore in its two days of release.
Before the release film trade analysts and experts had said that PRDP would turn out to be an even bigger film in terms of its Box Office collections perhaps beating the all-time collections of Rs 626 crore for Bajrangi Bhaijaan (collected from within and outside India). Bajrangi Bhaijaan had grossed over Rs 320 crore in India and stands as the highest grossing Bollywood film in 2015.
PRDP has brought together the successful director-actor duo of Sooraj Barjatya and Salman Khan. Media reports suggest PRDP, made at a budget of Rs 60 crore (production cost) and another Rs 20 crore (marketing and publicity cost) has managed to sell the satellite and music rights at Rs 57 crore. With no big Hindi film release clashing with PRDP till November 27 when Tamasha starring Ranbir Kapoor and Deepika Padukone is released, PRDP is expected to rake in over Rs 250 crore within first 10 days of its release. Bajrangi Bhaijaan's 10-day collections stood at Rs 241 crore according to film portal Koimoi.
"PRDP has created the right buzz across mainline and digital media. The films first look was revealed almost four months back. Then each week something or the other kepts coming up on YouTube and other social media platform. Just one day ago the interview of Salman, Sooraj and Sonam went up on YouTube and has already clocked views upwards of 2.5 lakhs. All these elements put together manage to attract viewers to the theatres," says a film trade analyst.
Explaining the arithmetic of movie business, another analyst said: "Take the average ticket price for PRDP to be Rs 150 and the average theatre capacity of 300 for one show. There are at least 4-6 shows running every day and there are 4,500-plus screens showing PRDP. At 70 per cent occupancy across all screens, the one-day collections (minus taxes etc.) should easily work out to be Rs 60-70 crore initially. Of course the average ticket price varies across geographical areas so does the per screen audience capacity. But a back-of-book calculation shows that with right buzz, star power, strong storyline, and repeat viewers interest, a film can rake in a lot of money."
What is working for PRDP is the star power of Salman Khan and Sooraj Barjatya along with a huge ensemble cast appealing to family audience across most age-groups. PRDP is Salman’s fourth venture with the Rajshri banner. Prior to this, Khan has delivered three blockbusters with the Barjatyas - ‘Maine Pyar Kiya’, ‘Hum Aapke Hain Koun!’ and ‘Hum Saath Saath Hain’.  Then film is produced by Rajshri Productions and distributed by Fox Star Studios.
[email protected]
Tags assigned to this article:
entertainment box office Prem Ratan Dhan Payo ashish sinha