Preity Zinta thanks Dhoni for 'all the incredible memories', shares throwback picture

Preity Zinta thanks Dhoni for 'all the incredible memories', shares throwback picture

Mumbai (Maharashtra) [India], August 17 (ANI): Thanking India's World Cup-winning captain MS Dhoni for all the incredible memories, actor Preity Zinta on Monday shared a throwback picture with the former Indian skipper as she said that 'You are and always will be the coolest one.'
"The Helicopter has landed but the ride will be unforgettable," wrote the Kal Ho Naa Ho' actor as she remembered the Dhoni's signature Helicopter shot.
The 'Koi Mil Gaya' star put out to Twitter a throwback picture that captured a light moment between the two. In the picture, Zinta is seen holding hand with the 'Captain Cool' as they both share a smile, amid the cricket field. The picture seems to be taken in between an IPL match as Preity is seen sporting the 'Kings XI Punjab' team T-shirt while Dhoni is seen wearing the 'Chennai Super Kings' T-shirt as he holds the cricket protective helmet.
She continued to write in the post, "Thank you @msdhoni for all the incredible memories. You are and always will be the coolest one. Wish you all the best in life #Captaincool #Legend #India'sfinest #ting." 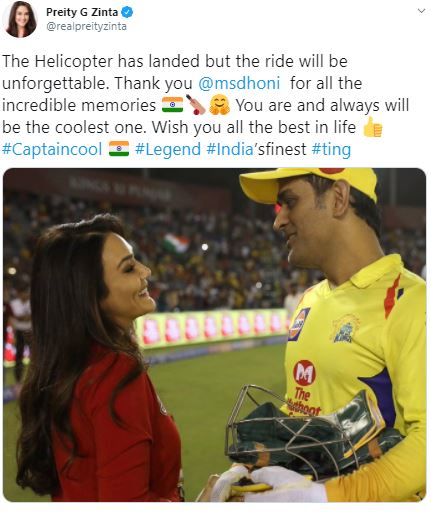 The post on the micro-blogging site received more than 5.8 thousand likes within an hour of being posted.
On Saturday, Dhoni had announced his retirement on Instagram. The wicket-keeper-batsman Dhoni shared a video and captioned the post, "Thanks a lot for ur love and support throughout. from 1929 hrs consider me as Retired."
The video had the iconic song 'Mai Pal Do Pal Ka Shayar Hu' from Amitabh Bachchan's 'Kabhie Kabhie' playing in the background and in it, Dhoni shared his incredible journey in the Indian side including his run out in the last game against New Zealand in the World Cup 2019 semifinal. He is among the most successful captains in world cricket.
It was under his leadership that India lifted the ICC Cricket World Cup in 2011 after having led India to triumph in the ICC World T20 in its maiden edition of the tournament held in 2007 in South Africa. (ANI)