New Delhi [India], January 24 (ANI): Actor Preity Zinta on Sunday shared a quirky meme curated by Mumbai Police based on the song 'What's Goin On' from her superhit film 'Salaam Namaste', which co-starred Saif Ali Khan.
Mumbai Police is widely known for using trendy, creative, and artistic touches to their posts to dictate law and spread awareness. In a recent Instagram post, the police reminded people to abide by important safety measures during these testing times.
Mumbai Police had created a meme that stressed upon staying indoors instead of wandering outside during the coronavirus pandemic. Partying in the city is prohibited post 11 pm as a precautionary measure against the pandemic.
Preity, who endorsed Mumbai Police's advisory about the 11 pm deadline amid the ongoing coronavirus pandemic, shared it on the photo-sharing application. The meme uses a still from the song featuring Preity and Saif out on the streets, edited with masks on their faces.
"Paune Gyarah Baje Dono Ghar Pe Chale That's What's Goin' On," the text on the meme reads. Appreciating Mumbai Police's work, the 'Veer Zara' actor, wrote, "Mumbai police is right. Don't stay out too late, wear masks and stay safe folks #Ting." 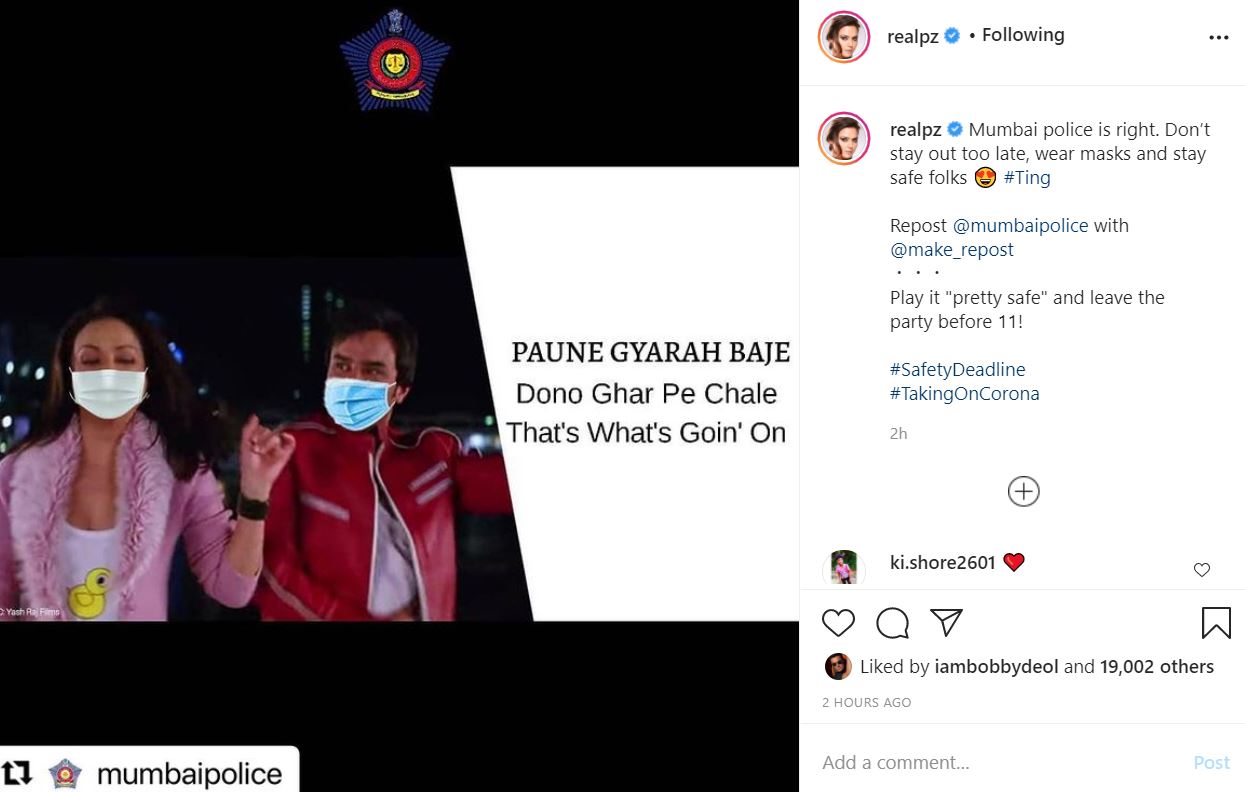 Mumbai Police has been consistent in keeping up with social media trends and using the platform to post content that is equal parts disciplinary and relatable. However, Mumbai Police is not the only department that frequently uses social media platforms to spread awareness and health regulations. Pune Police and Bengaluru Police too share creative posts to remind people about the safety measures to combat the spread of the deadly disease.
Directed by Siddharth Anand, 'Salaam Namaste' also featured Arshad Warsi and Jugal Hansraj. 'What's Goin On' was sung by Kunal Ganjawala and Sunidhi Chauhan. The song featured Preity as a pregnant woman roaming around on the streets around midnight. (ANI)