New Delhi [India], January 27 (ANI): As her beloved friend Bobby Deol ringed in his 52nd birthday, Preity Zinta on Wednesday shared the sweetest birthday wish for him along with a short video clip of their song 'Hum Toh Dil Chaahe Tumhara' from the movie 'Soldier'.
Adoring their friendship and revealing some quirky moments they share in the caption, she wrote "Happy Birthday my darling @thedeol. I remember us shopping 4ur wardrobe for this shoot in New Zealand & how I felt like ur personal assistant instead of your co-star. I still haven't forgiven you for renaming me Pritam Singh & making everyone believe it's my real name... 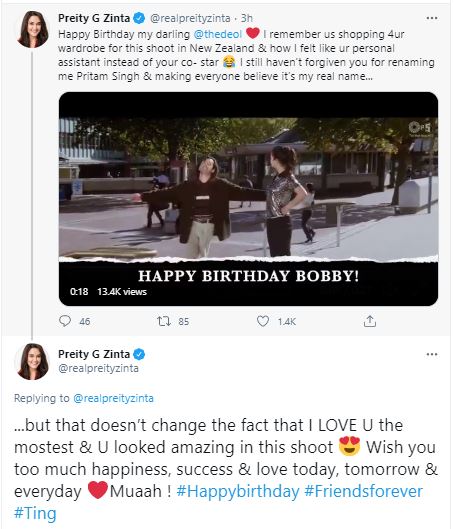 "...but that doesn't change the fact that I LOVE U the mostest & U looked amazing in this shoot Wish you too much happiness, success & love today, tomorrow & everyday. Muaah ! #Happybirthday #Friendsforever #Ting," her tweet further read.
The duo has worked together in Hindi films like 'Soldier' (1998), 'Jhoom Barabar Jhoom' (2007), 'Heroes' (2008).
Meanwhile, on a professional note, Indian actor Bobby Deol who turned 52 on Wednesday was last seen in MX Original Series 'Aashram' as Baba Nirala. He will next be seen in Bhushan Kumar's next project 'Animal' that will also star Ranbir Kapoor, Anil Kapoor, and Parineeti Chopra.
'ANIMAL' is directed by Sandeep Reddy Vanga and produced by Bhushan Kumar and Krishan Kumar's T-Series, Pranay Reddy Vanga's Bhadrakali Pictures, and Murad Khetani's Cine1Studios. (ANI)