New Delhi [India], Aug 9 (ANI): Bollywood actor Preity Zinta got all nostalgic as her sci-fi movie 'Koi... Mil Gaya' completed 17 years of its release on Saturday.
The 'Veer-Zaara' actor took to the social media handle late on Saturday to recall the memories attached to the film, which she says to be the "sweetest" movie she ever did.
On Instagram, the 45-year-old star shared a brief clip of the song 'Idhar Chala Main Udar Chala' -- a song from the flick sung by Alka Yagnik, and Udit Narayan.
The actor thanked the entire cast of the film, including director Rakesh Roshan, Farah Khan, co-stars Hrithik Roshan and Rekha for making the movie an "unforgettable experience."

"Remembering Koi Mil Gaya today. The sweetest film I did. A story about friendship in a time of innocence with the warmth of Jadoo. A big Thank you to @rakesh_roshan9 sir, Rajesh sir, @dop007 Ravi Chandran, @farahkhankunder @hrithikroshan, #Rekhaji and entire cast n crew for this unforgettable experience. I loved making this movie. It will always be Magical," read the captions.
Actor Hrithik Roshan, who played the lead in the movie also marked the milestone completion of the movie on Twitter on Saturday.
Roshan played the role of an intellectually-disabled boy coming in contact with an alien and making wonders in the scientific field.
The 'War' actor shared a montage video comprising stills, and videos from the movie that featured his character Rohit sharing some sweet, adorable moments with Jaadu, the alien friend.
"Some friendships defy space and time. Someday hopefully soon they will meet again. Miss you jaadu. #KoiMilGaya," he tweeted alongside the video. 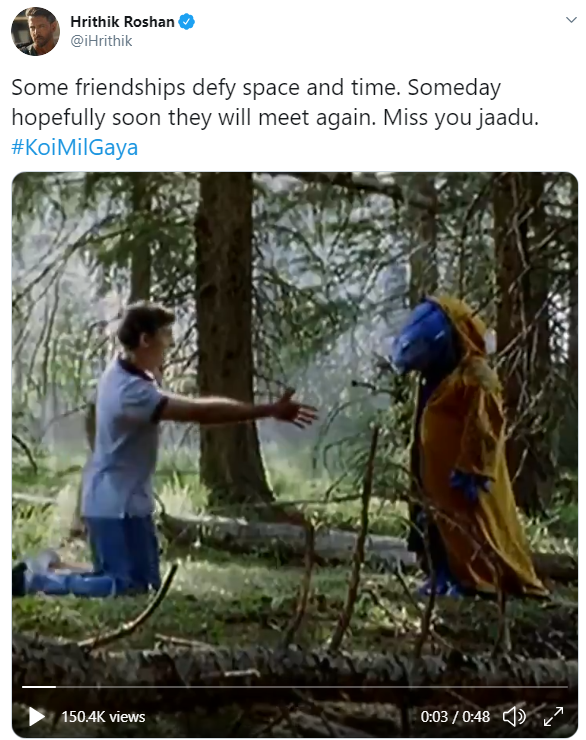 The film was released in 2003 and was followed by its sequels 'Krrish' and 'Krrish 3'.