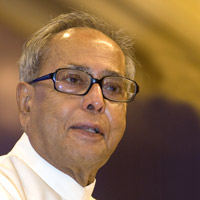 Indias currency has suffered sharp losses by over 15 per cent in the last few months, leaving a bruising impact on the country?s imports, which mainly comprise crude oil.

The rupee depreciation has resulted in the higher landed cost of the crude oil by the state-owned oil marketing companies, which have not been able to pass on the price increase to the consumers.

The Reserve Bank too has expressed concern over the worsening current account deficit, which is likely to be 3.5 to 4 per cent of the GDP for 2011-12.

Asked about the rating outlook downgrades of the India?s sovereign rating, Mukherjee said fundamentals of the economy have to be corrected. "Fundamentals...we shall have to correct...," he said without elaborating what action the government was mulling.

He said the domestic issues cannot be discussed here since Parliament is in session.

The main areas of concern for Mukherjee were Eurozone and Japan, as they provide a big markets to the merchandise from the developing world.


"Unless recovery in Japan and Europe is fast-tracked and it will have its impact.

Eurozone crisis is expected to cast its shadow...," he said

The Indian Finance Minister who will assume tomorrow chairmanship of the ADB Board of Governors for a year, said the Asian region is still doing better than the developed countries.


India will be hosting the ADB annual meeting next year in New Delhi.

According to ADB Bank President Haruhiko Kuroda, Asias economy this year is set to grow by 6.9 per cent, and 7.3 per cent next year.

It is the internal demand within the region that is driving the Asian growth.