Power Play Of Another Kind 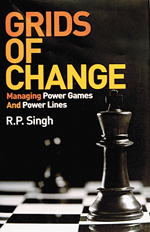 My next job would be to write a book.” This is what R.P. Singh told this writer in 2008, a few weeks before he retired from the post of chairman and managing director of public sector enterprise Power Grid, a position he held for a decade. Singh said the book would expose what it takes to survive in a public sector undertaking. True to his word, Singh, who always flirted with high-voltage controversies, has come up with the promised volume, Grids Of Change.

The book provides several anecdotes of decision making during Singh’s tenure, though many of them lack hardcore evidence. Singh takes a dig at many; tells you how his own colleagues, bureaucrats and politicians were always plotting against his meteoric rise in the company. For those unfamiliar with the power politics in India’s public sector companies, this may not make much sense. But for the initiated, this would be interesting reading.
At the end of the day, Singh, known for his never-say-die attitude, has to be credited for making Power Grid what it is today. Today, the company is one of the largest transmission networks in the world and distributes 45 per cent of the power generated in the country on its networks. But was all this possible with so many conspirators working against him? Having known Singh for a very long time, it is surprising that he has not really named some of his chief tormentors. That said, the book makes an interesting read as a former PSU chief’s candid account of what it takes to cut the red tape to build an organisation.
(This story was published in Businessworld Issue Dated 18-01-2010)
Tags assigned to this article:
magazine book review penguin selection psu power kandula subramaniam grids of change rp singh