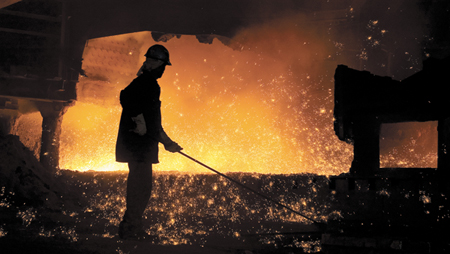 Much of that initial euphoria has now dissipated. Ispat is still in the red. It posted losses of Rs 1,789 crore in the first three quarters of  FY12, of which Rs 308.57 crore was in the third quarter alone. It is still plagued by many of the old problems it faced when the Mittals were in control. While analysts think it will take at least two years to put Ispat back on track, Jindal is not talking about his prized acquisition any longer. He did not speak to BW or answer any of the queries that were sent to him by email.

The Problems
So what went wrong? How did Sajjan Jindal, a steel industry veteran who knew the business inside out, make such a miscalculation? Most analysts and industry experts who spoke to BW feel that the reasons that guided the Ispat acquisition were valid but Jindal vastly underestimated the task of turning the company around. Being dragged into the controversy on illegal mining for iron ore in Bellary, Karnataka, has only served to further harm his interests.

Jindal's primary reason for taking over Ispat  was a technologically superior plant located in a great market. Expanding capacity by building new plants had become almost impossible because of land acquisition and other regulatory issues. From Posco to ArcelorMittal, everyone who had announced big plans to set up greenfield projects had run into problems. On the other hand, Ispat had an operational plant and was looking for a buyer. It was a perfect fit.

"Ispat had excellent assets (plant and machinery) but was not able to use them optimally," says Jagdish Agarwal, senior research analyst at Emkay Global. Jindal was well aware of Ispat's troubles. The company had a debt of around Rs 8,000 crore, was plagued by poor cash-flow management, and was losing money every year. It had difficulty sourcing raw material and encountered problems in securing power. But Jindal was optimistic.

Immediately after taking over the management, JSW moved to tackle the hurdles one by one. Plans to get the debt-laden steel company back on track included aligning the marketing strategy, improving raw material sourcing and arranging power linkages at competitive prices. There was the medium-term capital-expenditure plan of Rs 3,140 crore to set up a 110 MW captive-power unit, a 3 mtpa pellet plant, 1 mtpa coke plant and to expand steel production at Dolvi to 4 mtpa.

A 300 MW unit of JSW Energy at Ratnagiri was meant for captive power supply. JSW pumped in Rs 163.29 crore in the power company to secure long-term power supply. Corporate debt restructuring was also part of the action plan. Eventually, Rs 6,000 crore of debt was reported to have been refinanced and the remaining negotiated at a lower interest rate. "The benefit of the same has, however, not been substantial as JSW got only ‘marginal savings' in the refinancing exercise," says Emkay's Agarwal. Industry experts also say that debt restructuring did not pay the expected dividends because of continual rise in interest rates. In an interview to a business daily, Seshagiri Rao MVS, joint managing director and chief financial officer of JSW Steel, and a member of the board of JSW Ispat, pointed out that interest rates have risen 13 times since the deal. This has  effectively spoilt the chances of any gains that JSW hoped to make via the debt restructuring.

break-page-break
Increasing problems in sourcing raw material further exacerbated JSW Ispat's situation. Almost all of the company's raw material problems stemmed from it getting embroiled in the Bellary illegal mining controversy. JSW Steel, its Karnataka plant, in particular, got the bulk of its ore from Bellary. It sourced ore supplies mainly from local miners in the Bellary region. It also had a long-term tie-up with the state agency, National Mineral Development Corporation (NMDC), for ore supplies.

The Bellary Bug
Though Jindal or JSW executives have never said this outright, steel industry analysts feel that JSW was banking on steady supply of ore from Bellary to fix Ispat's raw material supply problem. Unfortunately, the issue of illegal and over-mining in Bellary and the corruption charges against Karnataka ministers came into the limelight in the report by Santosh Hegde, the state lokayukta, in July 2011. Hegde's report indicted NMDC and companies such as JSW Steel, Adani and Sesa Goa, for being part of the illegal mining scam in the state. Any such role was denied by the companies. JSW's operations suffered a huge blow when the Supreme Court decided to ban mining in Karnataka after taking cognisance of the lokayukta's report. Suddenly, the regular supplies of ore dried up for JSW. While this affected JSW Steel's 10 mtpa Vijayanagar plant — the production dropped 50 per cent almost overnight — it also put paid to Ispat's raw material calculations.

Even before iron ore supply became a major worry, another problem had cropped up: the gas supplies that came from the Reliance KG D6 basin saw a sharp drop from 60 million metric standard cubic metres per day (mmscmd) in June 2010 to 50 mmscmd in March 2011, and the petroleum ministry ordered Reliance to divert gas to priority sectors like power and fertilisers. Ispat's steel plant in Dolvi is gas-based and got about 0.6 mmscmd of gas from Reliance. There is still no sign of improvement in gas supplies. "It hasn't improved in the past one year and will not improve significantly in the coming year either," says Ravindra Deshpande, senior research analyst at Elara Securities.

Deshpande says they had always been sceptical of the acquisition: "Our ratings went negative the day the acquisition was announced." He thinks it would be better to invest in JSW's already existing 10 mtpa Vijayanagar plant; and for JSW to increase the plant's capacity — it happens to be one of the better-run steel plants in India. But this plant has also suffered from poor ore supplies because of the Bellary issue.

Ispat has some mining areas allotted to it, but these do not solve the problem. "They had got some (iron ore) mines in Maharashtra, but these are yet to start," adds Prasad Baji, senior vice president at Edelweiss.

Also, the planned Rs 490-crore 110 MW power plant by Ispat Energy (to be implemented in two phases of 55 MW each) has been dropped because of issues with equipment standards. The company's power supply arrangement with JSW Energy also faltered temporarily after the state electricity board objected to it. This seems to have been sorted out though. The Maharashtra State Electricity Distribution Company (MSEDCL) has given open access permission for wheeling 220 MW power from one of the units (captive to the company) of JSW Energy. And since 19 January 2012, JSW Ispat has started receiving power from the unit.

break-page-break
As of now, the financial status of Ispat has improved only marginally. Gross sales for end-December 2011 stood at Rs 2,889.16 crore; marginally lower than the Rs 2,901.49 crore at end-March 2011, the quarter after which JSW took management control. It is just slightly higher than end-March 2010's Rs 2,550.03 crore.
Road To Profits...

To start earning profits, capacity issues are one of the crucial aspects that need to be fixed. Then, there is the issue of input sourcing.

JSW Ispat's loss of Rs 308.57 crore in the third quarter of FY12 is largely on account of high raw material costs and forex losses. They posted a forex loss of Rs 234.75 crore for the six months ended December 2011. On the other hand, input costs currently stand at Rs 1,783.63 crore. Between June 2010 and June 2011, raw material import costs stood at Rs. 2,295 crore , about 93 per cent of their import bill. And these imports account for 42 per cent of raw material consumption. To tackle this, it is essential to improve backward integration. That is, to develop their own steady sources of raw material. But even that might not be easy to do. As Deshpande puts it, "Many companies have got mining leases, but have
not been able to start even 3-4 years after project approval."

The next step is to tackle debt. "JSW now owns 49 per cent of Ispat. To that extent, it will, naturally, be affected. One of the concerns for JSW-Ispat is the high quarterly interest expense of Rs 280 crore," says Edelweiss's Baji.

Should JSW have opted for the greenfield or the brownfield route? "The rationale of the Ispat acquisition is related to the classic "buy vs build" dilemma that corporates face. Expansion projects in India can get inordinately delayed. Hence JSW decided to opt for the buy option by acquiring 49 per cent stake in Ispat. Effectively, the valuation paid was around replacement cost," explains Baji. The deal was also premised on factors like VAT benefits that JSW could leverage by selling to its downstream plants in Maharashtra, say some experts. They also believe a merger could happen down the line to avail tax benefits because of Ispat's high losses.

JSW seems to be sunk in not just its own problems, but Ispat's as well. Analysts are not too sure when the company will break even. Everything is contingent on a solution to the troubles down south and gas supplies. Tarang Bhanushali, AVP, metals and capital goods at IIFL says, "I believe the company will turn around in the second half of 2013 (on the assumption that mining in Karnataka will be allowed by then). And it's also based on our belief that steel demand
will improve."

JSW has, in fact, been able to bring about some synergies at the operational level. Operating margins swung from -14.48 per cent in the December 2010 quarter to 13.67 per cent in the March 2011 quarter. But since then, these figures have oscillated and analysts believe will continue to do so. So far, the broad consensus remains that if the cloud over input sourcing clears, the silver lining should not be too far. News at the time the story went to press suggests that the Supreme Court will deliver its verdict on 20 April, and industry insiders are hopeful that the mining ban in Karnataka will be lifted.

But they do expect producers to be bound by extraction limits and having to sell the ore through e-auctions.

For now, it seems like a winner's curse. The bidders who lost out in the race for Ispat may actually be feeling happier than Jindal at
the moment.