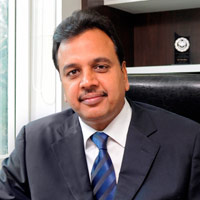 08 November, 2014
Print this article Font size -16+
In the backdrop of current fiscal situation and forthcoming election year, the Budget is a balanced attempt to revive growth without significant surprises. Focus on social sector reforms, with increased outlay on planned expenditure, will pave way for the overall and inclusive growth. Inflation is likely to be under control with lower fiscal deficit target of 4.8 per cent of GDP for fiscal year 2013-14. Direct Tax surcharge on high Income bracket assesses and ambiguity about tax residency proof may create some short term negative impact on the capital markets.
In order to encourage capital investments, companies investing Rs 100 crore or more in plant and machinery in 1 April  2013 to 31 March 2015 will be allowed 15 per cent investment allowance apart from depreciation. SIDBI's re-financing facility to MSMEs is proposed to be doubled to Rs 10,000 crore. The Honourable Finance minister has proposed a corpus of Rs 14000 crore to be infused in PSU banks to help them meet the Basel III requirement. In a boost for infrastructure sector, four Infrastructure debt funds have been registered and certain institutions would be allowed to raise tax free bonds up to Rs 50,000 crore in 2013-14 based on the need and capacity to raise funds from the market.
The Budget has tried to be pro financial savings by liberalising Rajiv Gandhi Equity Scheme (RGESS) to allow first time investor to invest in mutual funds and equity for 3 years and enhancing the threshold income limit to Rs 12 lakh. The introduction of inflation linked bonds is an effort in the right direction and will ensure that real returns accrue to the investors opting for financial savings rather than gold or real estate. TDS at the rate of 1 per cent on the value of the transfer of immovable properties, where consideration exceeds Rs 50 lakh has been introduced. This will bring a large number of potential tax payers in the tax net.
There were no changes in slabs and rate for personal income tax. A tax credit of Rs 2,000 to be provided to every person having income of up to Rs 5 lakh which will benefit  1.8 crore assesses in the lower slabs. Surcharge of 10 per cent will be levied for individuals whose taxable income is over Rs 1 crore. To encourage home buyers, a first housing loan of up to Rs 25 lakh would get additional deduction of interest of up to Rs 1 lakh in 2013-14, taking the total amount to Rs. 2.5 lacs which will give impetus to housing projects in Tier II and Tier III cities.
For Corporates whose taxable income exceed 10 crore, the surcharge will increase from 5 to 10 per cent on domestic companies and for foreign companies surcharge to increase from 2 to 5 per cent. The surcharge on dividend distribution tax or tax on distributed income, will also increase from 5 to 10 per cent.
On the Capital market front, reduction of STT on Equity transactions and introduction of CTT on non-agriculture commodities would create level playing field and might help in increasing volumes in equity market. Allowing small and medium companies to get listed on MSME exchange without making an Initial Public offer (IPO) might reduce the time and efforts required to tap capital marketsfor upcoming companies.
While the FM talked about reaching consensus with States on the GST implementation, earmarking Rs 9000 crores towards the first instalment of compensation form Central Govt to States provides hope for early implementation of GST. There were no major changes in excise, service tax & customs duty rates except for increase in rates for products considered to be luxury. One time voluntary compliance scheme for service tax defaulters might help get more assesses under the service tax net.
Overall, with fiscal consolidation and social sector expenditures being planned the finance minister has done a great balancing act. On the one hand, he has encouraged manufacturing sector by announcing Investment allowance, brought clarity in defining foreign investment through FDI and FIIs, investment in infrastructure by enhancing limits for issue of tax free bonds, freeing up NELP blocks and increasing tax holiday period for power sector. He has reduced STT, liberalised RGESS, and introduced inflation linked bonds to promote financial savings among other measures, on the other hand, he has announced taxation of super-rich, taxed buy back of shares for unlisted shares, increased surcharge and proposed higher taxation on luxury products. However, what needs to be seen is how much of this gets actually implemented individually and that will determine whether the growth would be at 5.5 per cent or 6 per cent or it was merely the budget speech.
Sunil Goyal, MD, Ladderup Corporate Advisory
Tags assigned to this article:
taxation gst fiscal deficit sunil goyal rgess union budget 2013 super rich tax surcharge ladderup corporate advisory