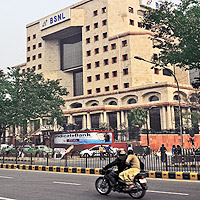 08 November, 2014
Print this article Font size -16+
Bill Clinton said that being president was like running a cemetery: you have a lot of people under you, but nobody is listening. It is a description that could just as well apply to being chairman of state-owned Bharat Sanchar Nigam (BSNL). The government has been looking for the right person to take this job, but has not settled on a candidate.

More than 15 applications were received for the job early this year. Despite the best efforts of the Department of Telecommunications (DoT) to attract the best talent from outside BSNL, as suggested by the Sam Pitroda committee, just three applicants were from outside government, according to sources in Sanchar Bhavan.

While other telecom companies continue to add subscribers by the millions, BSNL has only 70 million mobile subscribers, each of whom averages about Rs 150 in monthly billing. Though BSNL added 2.29 million in August — market leader Bharti Airtel added 2 million to go to over 140 million — it still doesn't seem to attract talent.

The first problem is compensation: it does not match private sector levels. "To get the right person, the salary is a major attraction," says A.K. Sinha, former chairman and managing director (CMD) at BSNL. "The challenge of just being able to resurrect BSNL's fortunes won't be enough." A private telecom CEO gets a salary of roughly Rs 5 crore; a BSNL chairman can only count on lakhs.

It is not exactly a small operation either. It has assets and infrastructure spread all around the country, estimated to be worth about Rs 1 lakh crore. Communications minister A. Raja seems to have given up on finding a private sector candidate — he has been pushing for an insider to take the job.

That's the second problem: remote control of BSNL's decisions by mandarins sitting at Sanchar Bhawan, says B.K. Syngal, another former CMD of Videsh Sanchar Nigam. There is no freedom for the CMD or the board; he faces interference from political heads, he adds.

How much freedom does management have, then? The minister of state in the Ministry of Communication and Information Technology, Sachin Pilot, said that BSNL is accountable to DoT since it has signed a memorandum of understanding with the government.

In a written response to a question in the Rajya Sabha in September 2010, Pilot said that BSNL management is completely free to decide and finalise its commercial and business policies, (but) review of the quality of service it offers can happen periodically at various levels in DoT. "Why would anyone join such an organisation, where audit and accountability haunt the CMD at every step?" Syngal asks.

According to the grapevine in the corridors of Sanchar Bhawan, Rohit Chandra, currently chief operating officer, and the man who set up the marketing of Uninor, is likely to take up the top slot. Chandra was not available for comments. For the record, he has not applied for the post.

For whosoever becomes CMD at BSNL, insider or from outside, the challenge will be stark. "He or she should ask for a clear mandate and the power to implement it," says D.P.S. Seth, another former BSNL chairman. Adds Syngal: "Set the rules with Sanchar Bhawan in advance and carry a resignation letter all the time, if you wish to run BSNL." In other words, walk softly, but carry a big stick.