Mumbai (Maharashtra India), January 22 (ANI): Bhajan singer Narendra Chanchal, who was insanely popular for his religious songs and bhajans, died at around 12 pm on Friday due to health-related issues. He was 80 when he breathed his last at a Delhi hospital.
Sanjay Malik, who has been Narendra Chanchal's concert organiser for the last twenty-five years reportedly revealed that the iconic Bhajan singer died due to age-related issues. As per several reports, the singer, who was keeping unwell, had been admitted to the Apollo Hospital for two months.
Following the news of the veteran singer's demise, various public figures took to social media and shared their heartfelt condolences.
Prime Minister Narendra Modi took to Twitter and wrote, "The news of the demise of popular bhajan singer Narendra Chanchal Ji is extremely sad. He made a mark in the art of singing bhajans with his vibrant voice. My condolences to his family and fans in this hour of mourning. Om Shanti!"

Famous singer Daler Mehndi also shared the news of Chanchal's death and wrote, "Deeply saddened to learn that iconic and most loved #NarendraChanchal Ji has left us for the heavenly abode. In prayers for his soul to rest in peace. Heartfelt condolences to his family and legions of fans." 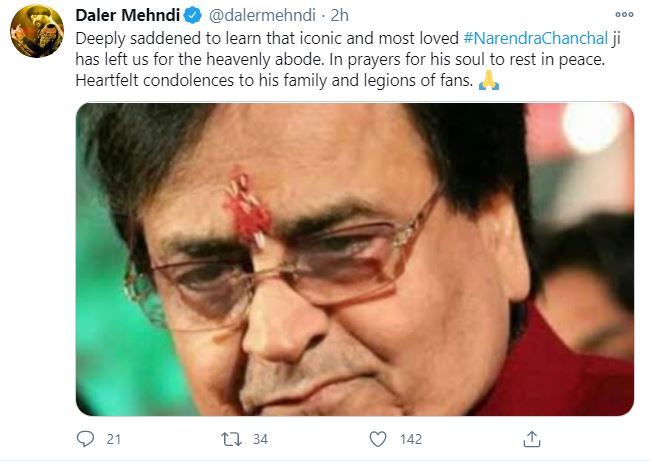 Veteran singer Lata Mangeshkar also paid tribute to the late star on the micro-blogging website. She wrote, "I just came to know that a very talented singer, a devotee of Matarani, Narendra Chanchal Ji died today. I was very sad to hear this. He was a very good person, may God give peace to his soul. I offer a humble tribute to him."

Former Indian cricketer Harbhajan Singh also penned an emotional post on Twitter. He wrote, "Deeply saddened to learn that iconic and most loved #NarendraChanchal ji has left us for the heavenly abode. In prayers for his soul to rest in peace. Heartfelt condolences to his family," Bhajji wrote on the micro-blogging site.

Singer Jaspreet 'Jazim' Sharma took to his Instagram account and wrote, "Rest in peace #narendrachanchal Sahab. You will be always alive for your contribution in Music. May the departed soul rest in peace."

Chanchal, apart from performing at live events for a large part of his career, was also widely known for his songs like 'Chalo Bulava Aaya Hai' from 'Avtaar' and 'Beshak Mandir Masjid Todo' from 'Bobby'. The evergreen singer even won the Filmfare Award for Best Male Singer for the 1973 film 'Bobby'. (ANI)