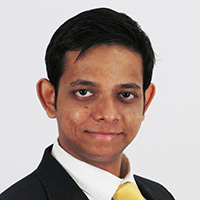 08 November, 2014
Print this article Font size -16+
In my last column (Nifty Corrects Itself Amidst Uptrend) up  I had mentioned a major support zone of 6880. The markets on Friday (9 May) touched a low of 6880.95 and then rallied 220 points on the Nifty and 680 points on the Sensex. This quick move up was very surprising and I myself was unable to capitalise on it, despite having the foresight that higher demand will kick the charts to a higher level. The market can take you by surprise many times and that shows the greater necessity for discipline for active trading as compared to analysis which is passive and not action worthy. In Friday’s case, my Newton Method did trigger a buy before the upmove started, but the swiftness of the move deprived me of the chance to capitalise on it. Hopefully many readers would have been able to make an investment in the market at the opportune time.

As we know this rally is being lead by the anticipation of a BJP lead government coming into being. Today, ie. 12th May,  the 9th and final round of polling will end and the media will start airing exit poll results. If these exit polls suggest anything other than a BJP lead government we might even see the index drop by a whopping 8-10 per cent.

The Put Call Ratio, defined by the volume of Put Options  vs the Call Options, is widely believed to reveal the general sentiment of the market. It is currently at 1, indicating that both sides – the bulls as well as the bears are equally determined.  On the other hand, volatility is also high with the VIX hitting newer highs. The VIX is at the highest point in the last 4 years and that means Option Contracts will command a much higher premium. You can expect the volatility to collapse after 16th May when the election results are out and the markets have reacted.

The rest of the week has the following events lined up:

On 14th May, Wednesday
WPI for the month of April
The CPI is expected to be inflated because of deficiency in the monsoon due to the El Nino effect. It is also interesting to note that the El nino has always been active during parliamentary election years 2004, 2009 and now in 2014

15th May, Thursday
- Earnings of NTPC, Bajaj Auto
- RBI board meet in Shimla

Trade Well
•    Until you become an experienced trader, do not risk more than your disposable income.
•    Risk no more than 0.5 - 1 per cent of your capital per trade by adjusting position size to risk.
•    Profit percentages mentioned in the column are before deduction of brokerage, taxes and slippage. That’s because each broker charges at different rates.