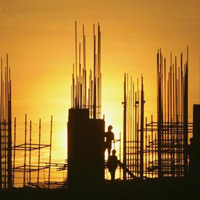 08 November, 2014
Print this article Font size -16+
A plan for a less chaotic land acquisition system for roads and industry in India won broad agreement from main political parties on Thursday (18 April). The government announced that party representatives had settled their differences on a bill to set clearer rules for allowing land to be purchased for such development, and for compensation to landowners who lose their property.

The proposed rules, which would replace laws dating back to the 19th century, would aim to speed up major projects and help a flagging economy, but businesses fret that they will raise costs and could actually slow down the acquisition process.

At present, the government can forcibly purchase land for certain projects by citing public good, a system that has led to deadly protests by small landowners who complain they are not adequately compensated.

Left-wing parties have said the proposed compensation for loss of livelihood under the reform plan is not generous enough.

"A broad consensus has been reached today at the all-party meeting on the land acquisition bill," parliamentary affairs minister Kamal Nath of from the ruling Congress party told reporters. He said the bill would be dealt with in the second half of a session of parliament that begins on 22 April.

Opposition leader Sushma Swaraj of the Bharatiya Janata Party (BJP) said, without giving details, that the government had agreed to most of a dozen suggestions she had made to fine-tune the bill. The law could oblige developers to pay up to four times the market price for land in rural areas and twice the market price in urban areas, and give displaced people homes and jobs.

In the most recent draft made public, the bill required up to four-fifths of all the landholders to agree to the sale to a company before any land can be acquired.

"The bill in its present form would have serious implications for economic growth in the country as it will impact our competitiveness", A. Didar Singh, secretary general of business chamber FICCI, said in a statement.

Left-wing parties oppose the bill, but the Congress party and the BJP together should have enough votes to pass it.

Some investors say that while the bill is likely to raise project costs, it will also bring policy clarity to the process of land acquisition.

Market watchers say the bill, once passed, will likely boost the share price of companies like DLF Ltd, India's largest real estate developer, Sobha, Unitech and Prestige, which own large tracts of land.