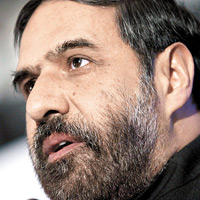 08 November, 2014
Print this article Font size -16+
The commerce ministry’s Department of Industrial Policy and Promotion (DIPP) — the nodal agency for foreign direct investment (FDI) policy in India — has said that probing violation of FDI laws in the country is the Reserve Bank of India’s job, and not DIPP’s.
It said this in response to a BW questionnaire asking if DIPP was aware that over 20 of India’s largest e-tailers, such as Flipkart, Snapdeal, Jabong and Yebhi, had attracted substantial foreign investment even though DIPP’s policy prohibited FDI in multi-brand retail.
A month after BW posed the questions to commerce minister Anand Sharma and DIPP secretary Saurabh Chandra, DIPP under secretary S. Natarajan responded: “Violation of FDI regulations is covered by the penal provisions of the Foreign Exchange Management Act (FEMA), 1999. The Reserve Bank of India (RBI) administers the FEMA Regulations and Directorate of Enforcement under the Ministry of Finance is the authority for the enforcement of FEMA. The directorate takes up investigation in any contravention of FEMA.”
Natarajan also said that a company with FDI could not sell multi-brand products directly to the consumer: “FDI is only permitted in B2B (business to business) e commerce...effective from 10 April 2012, FDI up to 100 per cent under the automatic route is permitted in e-commerce activity.”
This implies that most of India’s top e-tailers have violated the FDI law. Following a four-month-long investigation, BW  in its issue dated 1 October 2012 (‘E-tail’s FDI Outlaws’) showed 25-30 e-tailers had brought in FDI worth $800 million. BW showed how e-tailers had set up a multi-tiered web of firms to circumvent FDI laws. The world’s largest e-tailer, Amazon, did not activate its India business because of this prohibition.
Meanwhile, after a 20 September DIPP note, firms such Flipkart and Snapdeal have been considering moving to a marketplace model (like eBay and Crazeal) from the warehousing model.
Now the questions remain: who is investigating the extent of violation? And, who will levy the penalties, if any? BW awaits a response to its questionnaire to RBI.