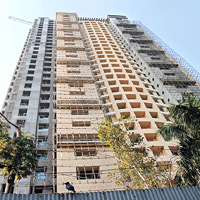 
Not surprisingly, the recent Medha Patkar agitation demanded the repeal of this controversial section and the government has agreed to review it. In another move, Chavan has also put on hold the policy of allowing builders to go vertical, squeezing slum dwellers into multi-storey buildings, while helping themselves to large swathes of slum lands. Chavan is in favour of a height cap of 10 floors.

To give teeth to his policies, the chief minister has inducted a set of senior bureaucrats with clean records. One of them, Subodh Kumar, the new municipal commissioner, has taken a dim view of builders ‘loading' their building projects with free-of-FSI embellishments such as canopies and balconies, which are then sold as part of the apartment as ‘super-built-up area' to unsuspecting customers. Referring to the trend of regularising violations by builders through the use of discretionary powers endowed on the municipal commissioner, Kumar told BW: "We are rewriting the rules wherein I will be the first to abolish my own discretionary powers. The new norms will be clear and nobody will have the scope to bend them."

But beyond the clean-up campaign, Chavan is a worried man. He is grappling with the problems of a financial capital that is slowly dying because high real estate prices have over the years made it an unviable destination.

Chavan recently admitted as much: "The population of the island city has actually fallen. There are jobs that can fetch you Rs 5 lakh a month in Mumbai, but these executives can't find a home easily. Many of them find it easier to locate careers in Bangalore or Hyderabad."

Ironically, the Mumbai clean-up has made real estate even scarcer as building permissions have dried up. Chavan is keen to get a mass housing policy going, which will include developing affordable rental housing. But till this pans out on the ground, the dilemmas of an unaffordable city will continue to hound him.