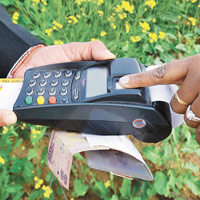 08 November, 2014
Print this article Font size -16+
Is the direct cash transfer scheme ending up as a political game plan for garnering votes in the 2014 general elections? While the basic issue of identifying the poor is still getting worked out, the government is readying to roll out the scheme by January 2013. Rejecting contentions that government is implementing the Aadhar enabled Direct Benefit Transfer (cash transfer) system in a hurry, Finance Minister P Chidambaram told Rajya Sabha on 13 December that the measure being implemented step by step will eliminate leakages, delays, duplicacies and falsification.

"It will lead to seamless transition. We believe that the new system, which we will introduce, will be more transparent. It will eliminate leakages, delays, duplicacies and falsification. Government firmly believes this will introduce a very high degree of efficiency and transparency," he said.

The government's announcement to roll out the direct cash transfer (DCT) scheme to replace subsidies from January next year has generated a heated debate. There have been some contentious issues like identifying target groups and whether some subsidies like food should continue through PDS, etc.

While the petroleum ministry has suggested pushing the deadline for LPG cash transfers by three months, citing lack of clarity over identifying the beneficiaries, the pressure is on banks to provide networks in the districts identified.

Before the government introduced the direct subsidy system, for some time now, a view had been gaining ground in the Planning Commission and the various ministries that direct transfer of funds to the intended beneficiaries will help plug many of the leaks in the system. Five small experiments, in three different regions of the country, were initiated to demonstrate proof of the concept's viability.

It was the late Rajiv Gandhi who had stated that out of every rupee that the Indian government spends on subsidising the poor, barely 10 paise reaches the actual beneficiaries. The rest, he estimated, was lost to leakages in the system. While not everyone agrees with the 10 paise estimate, almost everyone agrees that much of what India spends on subsidies goes to people other than those for whom the subsidies are intended.

Also a lot needs to be done regarding the issue of coverage of banking services across the country. While banking correspondents (BCs) now account for over 80 per cent of the bank presence in villages, the challenge is in bringing the entire country under direct cash transfer (DTC) by 2014.

State run banks plan to install around 63,000 rural ATMs. The National Committee on Direct Cash Transfers chaired by the Prime Minister has been set up to coordinate action for introduction of direct cash transfers to individuals under various government schemes. Under the SARAL money scheme, once an individual receives an Aadhaar, they can use Saral Money to make purchases, send money, or receive government disbursements at existing ATM, and the proposed micro ATMs.

Phased Application
Replying to a short notice question by Prakash Javadekar (BJP) as to whether government has taken a decision of direct cash transfer in beneficiary accounts for 29 centrally sponsored schemes, Chidambaram said a decision has been taken to shift to a system of Aadhar enabled Direct Benefit Transfer of funds under 34 identified central sector/centrally sponsored schemes.

The schemes will be implemented in a phased manner starting with 43 districts with effect from January 1 next year, he said.

Seeking to allay apprehensions of members over lack of infrastructure and training to implement the shift in the system of transferring the benefits, the Finance Minister said, "Technology will help us roll out (the cash transfer).

There will be some hiccups in the beginning but these hiccups will be overcome....Training is being provided. Bank managers, business correspondents are being trained."

Chidambaram said if complaints come under the Direct Benefit Transfer (DBT) scheme, they will be investigated and it will be easier to track irregularities as payments will be made electronically.

The Aadhaar project, which assigns a unique identification (UID) number to every Indian citizen, is expected to yield an internal rate of return (in real terms) of 52.85 per cent, says a study sponsored by the Planning Commission.

Aadhar To Save Over Rs 1 Lakh Cr In Next 10 Yrs
According to a study, which was released earlier this month, the savings from implementing Aadhaar will accrue to Rs 1,09,806 crore by 2020-21, while the cumulative spend estimated on account of the project during the 10 years will be Rs 37,187 crore.

The cost-benefit analysis of the Aadhaar project carried out by the National Institute of Public Finance and Policy (NIPFP) is expected to help the government counter the criticism of the huge budgetary allocation for Aadhaar enrolment and integration of the unique number with various social sector projects that involve cash transfer to beneficiaries. The government is expected to spend Rs 2,265 crore on Aadhaar-related projects during 2012-13. The projected enrolment trajectory aims to achieve coverage of 1.13 billion individuals by 2018.

The Centre had, in October, announced plans to finalise the road map and timelines for the implementation of direct cash transfers linked to projects such as MGNREGS, subsidised supply of foodgrain, fertilisers, LPG, etc. While 51 districts are expected to roll out cash transfers using the Aadhaar platform from 1 January next year, 18 states will come under the project by 1 April. The plan is to add 16 more states to the list by 1 April 2014.

Replying to a supplementary by Ramkripal Yadav (RJD) as to how will the beneficiary draw money and whether they have been trained, the Finance minister said there is a "tendency to underestimate" people.

"They are already using ATMs. It is only mini-ATM, a replica of ATM. Beneficiaries can draw benefit from mini-ATM," he said adding business correspondents will help them in this.

Chidambaram said the central ministries concerned have set up implementation committees on DBT, which will operationalise transfers with due consultations with state governments and various stakeholders.

Responding to the minister's written reply, Javadekar said earlier it appeared from the announcement of the reported "game changer" scheme made in the AICC headquarters that all Aadhar holders will get benefit and this was a new scheme but the reply makes it clear that many of the state governments are already giving cash transfer in few schemes.

Chidambaram said no one made the claim that all Aadhar card holders will get benefit of cash transfer and he can do nothing if the member wants to believe that there is nothing new in the government's announcement.

He said this shift to cash transfer will lead to "seamless transfer" of money from the ministry's account to the account of the beneficiary.

Javadekar asked as to how there could be a seamless transition expressing doubts whether there is required speed of internet for real time verification of the beneficiaries, electricity or even banks in far flung areas of the 43 districts selected in the first phase for rolling out benefits.

He said the government is trying to ensure that every scheme must have a digitalised list of beneficiaries.

"The list will be forwarded to Deputy Commissioners and Lead Banks," he said, adding that it will later be broken at state and district levels. He also said that the banks must have sufficient number of business transactions.

"Today I will talk to the Deputy Commissioners. I will tell the DCs unless these conditions are fulfilled, your district will not be selected. Ministries have also been told to digitalise," he said.