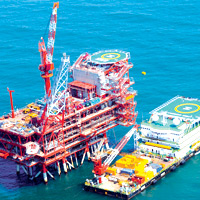 It is after a gap of 12 years, Reliance Industries (RIL) is giving a 1:1 bonus while maintaining the dividend at Rs 13 or 130 per cent per share. Clearly, this is a sentiment-boosting measure for all shareholders, including the promoters, since few things have changed since last fiscal. In the financial year 2008-2009, when RIL's year-on-year net sales went up by 10.3 per cent to Rs 151,224 crore, its EBITDA (earnings before interest, taxes, depreciation and amortisation) margins were lower at 15.7 per cent from 16.9 per cent in the previous year due to higher crude prices. Similarly, net profit from operations was also down by 2.5 per cent at Rs 15,296 crore.

The way ahead is stickier; lower refining and petrochemical margins and higher capital charges may continue to offset higher volumes from KG-D6 and refinery, according to brokerage house CLSA. With the gas production assumed at 33 mmsmd, Reliance may have a blended gross refining margin of $6.5 per barrel in Q2, down 13 per cent since last quarter, says Saeed Jaffery, an analyst with Ambit Capital.

Also, RIL has been engaged in a bitter court battle with the Anil Dhirubhai Ambani Group (ADAG) and national utilities such as NTPC. However, what upset many investors was the recent sale of treasury shares. As the legal battle around gas offtake from KG Basin refuses to die, the stock is clearly bearing the brunt.

In such a scenario, some upbeat news from E&P (exploration and production) space can improve the sentiment, which the management has attempted through a bonus issue. However, as Deepak Pareek, analyst at Angel Broking, puts it, "Fundamentally, a bonus issue will have no impact on the fundamentals as the numbers of shares will increase and the stock price will come down soon." After the bonus issue, the equity capital of the company will rise to Rs 3,286 crore from the existing Rs 1,643 crore, thus nullifying any long term gain.

In another development, Bangalore-based Infosys Technologies also celebrated with a dividend of Rs 10 per share (200 per cent on par value of Rs 5 per share). Its total income at Rs 5,585 crore, was marginally up 3.1 per cent and net profit at Rs 1,540 crore, up 7.5 per cent over Q2 of FY08. S. Gopalakrishnan, CEO and managing director feels that in the second quarter, the business climate has improved. However, his outlook for the next quarter is not rosy; he expects a a fall in income of 6.2 per cent (in rupee terms) and an 18 per cent decline in earnings per share, indicating sustained pressures on margins from clients.

According to Sandeep Gupta, risk manager of Edelweiss Securities, core earnings of the Sensex will fall by 2 per cent due to lower other income and a higher interest expenses. Also, the adjusted earnings of Sensex companies are estimated to decline by 2 per cent during the result review quarter, despite a 7 per cent rise in revenue and a marginal improvement of 30 basis points (24.7 per cent) in EBITDA margins across sectors.