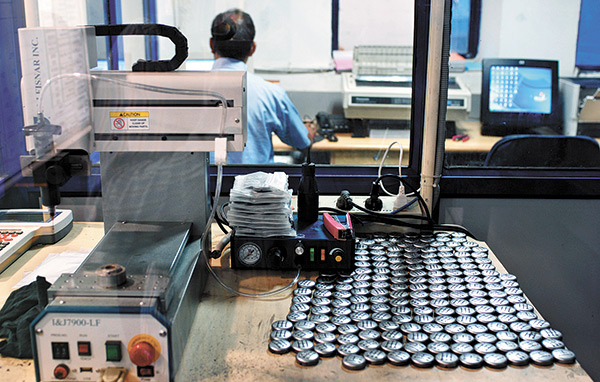 08 November, 2014
Print this article Font size -16+
Inside the plush office of Amit Kalyani, executive director, Bharat Forge (BFL), at Mundhwa in Pune, there is a distinct whirr, coming from the adjoining factory. The vibrations from the machines set off ripples in the glass of water on his desk. However, in the past 12 months there has been a distinct reduction in noise levels, probably the result of  BFL running at just 55 per cent of capacity. The company’s order book is slimmer, so is its top line. Result: stressed margins.

BFL’s story is played out across the auto ancillary sector in the country—heavily dependent on the domestic market which has seen growth slowing in past 24 months. While the Indian auto industry grew by a meagre 1.03 per cent in the past year, auto ancillaries witnessed degrowth. LMC Automotive, a global consultancy, in its July report says Indian auto buyers have been spooked by a slow economy and the high cost of finance and fuel.

Survival Strategies
To overcome the gloom in the economy, auto ancillary companies are trying every trick in the book to survive and, in some cases, grow. BFL has, for instance, invested in the design, engineering , product and business development aspects of the business. “We have invested Rs 600 crore in the last three years on increasing our capacity,” says 39-year-old Kalyani.

Global alliances are gaining steam too. Last June, Mahindra & Mahindra (M&M) and CIE Automotive of Spain signed an agreement to create Mahindra CIE. While component makers who supply to M&M fear that the new entity will be given priority, M&M’s CMD Anand Mahindra dismisses any such notion. “Mahindra CIE will have to earn its pay... to be a supplier to M&M, it will have to supply quality components at the lowest prices, given that there will be a right to first refusal,” he says.

Says Harish Seth, CMD of the Rs 270-crore Mumbai-based Setco, specialising in clutches and pressure converters: “It is a necessity that we innovate at this point.” Setco had charted out a Rs 80-crore expansion plan when the going was good. Now, Seth plans to invest at least Rs 20 crore on R&D.
Innovation Pays
For companies like Pune-based RSB Transmissions, dependent on the commercial vehicle (CV) industry — which degrew 26 per cent — things couldn’t have gotten any tougher. Founders R.K. Behera and S.K. Behera went back to the drawing board to spur future growth. Working with Warwick University and the IITs, they came up with the answer — use new steel and carbon alloys to make propeller shafts lightweight, and reduce wastage in the process.

Light-weighting is not new to the Indian auto industry. However, two years of hard work and a back-to-basics strategy has led the Rs 1,400-crore ancillary manufacturer to garner a significant share of the market in the CV industry. RSB’s propeller shafts were used in over 2 lakh Tata Ace sub-one tonne CVs, a segment which sold around 2.5 lakh units. “We had the support of large OEMs (original equipment manufacturers) to get to where we are today,” says R.K Behera, chairman, RSB Transmissions. “But to gain their respect, we had to get them to innovate with us.”

Behera says future growth lies in making aggregates, not individual components. This means RSB will build gears, transmissions, propeller shafts and axle beams as a whole — a value-add proposition. Its success with shafts and axle beams can be attributed to their ability to take higher torque with increased durability; in fact, their endurance almost doubled from 1.5 lakh km to 3 lakh km. RSB now plans to spend Rs 800 crore over the next couple of years to expand its manufacturing capabilities in India, the US and Europe. This, the group hopes, will take its revenues to Rs 5,000 crore in five years from the current Rs 1,200 crore.

While RSB is dependent on the CV industry, which forms 75 per cent of its revenues today, it is hoping to increase its business with the passenger car market. For this, the management will have to rethink capacities and learn to compete in a low-margin business.

The drive to innovate extends to other companies as well. Take the case of Johnson Controls, whose Indian subsidiary, inspired by jugaad, is creating designs suited to the local market. Nearly 150 engineers out of a total of 600 at its Pune centre are dedicated to the India business and their job is to completely localise components. Ever wonder why most variants of the Renault Duster, launched in 2012,  are priced in the sub-Rs 10 lakh bracket? It is because of  localisation. And JCI contributed to building its seats, which most pass off only for their looks and comfort.

The seats are part of a complex mechanism, the second-most expensive part of the car, with 400 components involved. JCI and Renault India had to factor in Indian roads to create comfortable seats for a wallet-conscious yet demanding consumer. “The seat of the car is like stitching a suit for a man while keeping in mind bumpy roads, safety, comfort and flexibility,” says Paul Chawla, CEO, Johnson Controls Automotive Experience.

Currently, the company is working on a smaller scale, with revenues close to $400 million (Rs 24,800 crore) in the country, and says its potential market is the 9 million cars expected to sell per year in India by 2024. “Being seat manufacturers, we are completely dependent on the OEMs and their success in a market,” says Chawla.
break-page-break
Chennai also houses the offices of the Rs 3,000-crore Rane Group. The group’s JV with US-based TRW Automotive, Rane TRW Steering Systems (RTSS), is known for its hydraulic power steering that goes into affordable cars and the light CV segment. RTSS was able to reduce the material costs on the power rack and pinion steering (PRPS) for the Duster because Renault’s market studies promised it scale. The Duster has sold over 52,000 units in just a year of its launch. These components are made on a semi-automated line that produces 700 units a day for the Renault-Nissan Alliance’s India operations and is gearing up to increase its output from 2,400 to 2,700 units a day. Given the scale, the parts rejected per million are only 39 when compared to a 1,000 a decade ago. This efficiency is on account of its association with TRW to meet the strict specifications of global OEMs in and around Chennai. In fact, the company is now exporting components to Latin America and Europe. RTSS is betting big on SUVs and entry-level cars in India.

With SUV sales growing 52 per cent in the last fiscal, at 553,660 units, the quick turnout of hydraulic pumps and PRPS for them is a priority for Harish Lakshmanan, MD, RTSS.  A company official says they are working on 30-32 mm diameter PRPS, which allow SUVs to take greater loads on the front axle and are, therefore, more driveable. “There is so much more to learn from our JV partner,” says Lakshmanan.

The Game Changers
Daimler India Commercial Vehicles (DICV), the India arm of the German major, has begun exporting trucks to Sri Lanka from its factory in Chennai. While the number of trucks exported is very small at the moment, just 64, the company expects the volume to grow in the coming years. DICV is also planning to use India as a hub to export its trucks to other countries in Asia and Africa. “The quality of parts from Indian suppliers has made this possible (exporting trucks from India),” says Marc Llistosella, MD and CEO, DICV.

So, even as auto ancillary units face stress on the domestic front, the opportunity to ride on the back of global players in India is expected to even things out.

Customisation opportunities for OEMS have also attracted the attention of some global auto component makers. For instance, CIE is focusing on innovation for newer products in India. “It’s an India moment now despite the current situation. That is why we have entered at this point in time,” says Jeasus M. Herrera, CEO, CIE Automotive. “Our focus has always been R&D and we expect to get huge boost with India operations that are designing products for the world,” he adds.

Then there are some Indian auto ancillary companies that have taken the road to acquisitions abroad to beat the slowdown at home. Not many have tasted success. A few years ago, Coimbatore’s Sakthi Automotive Components declared two foundries in Germany insolvent. Setco too is facing issues with its acquisition in Europe. However, there are some like Pune’s Autoline Industries that expect the strategy to work. When experts felt investing in the US market was a bad idea after the recession in 2008-09, Autoline purchased a bankrupt company and turned it around.  “The turnaround happened because of the value engineering that we had learnt in Pune — doing more with less,” says M. Radhakrishnan, CEO and founder, Autoline Industries. The brake pedals made at Autoline’s US plant helped them become a major supplier to a resurgent General Motors (GM). Of Autoline’s Rs 800 crore topline, 33 per cent came from its US business.

Autoline’s in-house software Morphor, when introduced in the US market, helped OEMs like GM reduce physical product testing in favour of simulation. Radhakrishnan believes the company’s next big move will be to scale down the sheet metal business — which is commoditised — and focus on proprietary components like exhaust systems and brake pedals. Today, 55 per cent of its revenues come from the sheet metal business. Autoline, incidentally, helped in the light-weighting the Tata Ace.

Some ancillary companies have also begun diversifying. Caparo, a subsidiary of UK-based Caparo Industries that specialises in sheet metal stamping and weld assemblies, has moved into new verticals such as railways and defence. The company had to make the shift after demand from Maruti Suzuki came down. “Although the gestation periods are long in these (new) businesses, the synergies are similar to what our expertise is in the auto businesses,” says Rajesh Prasad, MD, Caparo India, based in Chennai.  The company has gone to the extent of putting all capacity expansion in the auto ancillary business on hold.

“The margins in aligned industries like railways could go up to 20 per cent as opposed to the 11-14 per cent that most component makers work on in general,” says Vinnie Mehta, executive director, ACMA.

While moving to new businesses is one way to scaling up growth, some like Gurgaon’s Sona Koyo Steering Systems are looking to wait and ride out the bad times. “We have renegotiated service contracts and we aren’t hiring till things improve,” says chairman Surinder Kapur. The Sona Group supplies components to passenger, utility and commercial vehicles in the ratio of 40:20:40 and expects this to remain intact in the near future. Besides, Kapur is in the process of completing a feasibility study of South-east Asian markets  for a greenfield investment of Rs 50 crore, a first for an Indian auto component manufacturer; most others have traditionally gravitated towards countries in Europe and the US.

Be it innovation, investing in R&D or diversifying, auto component manufacturers have acquired survival strategies. The question is: will they be enough to sustain them in the long run?