Play Your Own Game 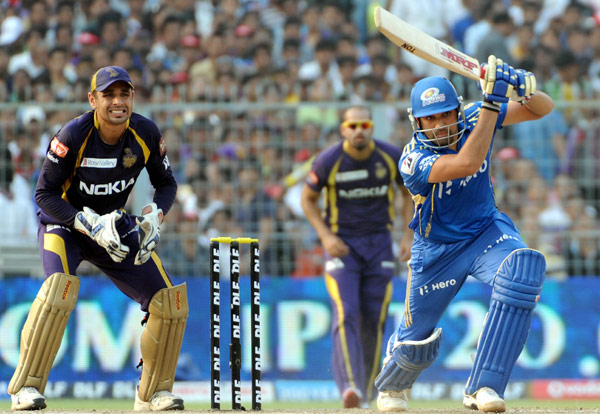 08 November, 2014
Print this article Font size -16+
Cricket fans can now enjoy the thrill of owning an IPL team virtually by purchasing their favorite cricketers in a fantasy league that may fetch them rewards based on their player's performances.

Available at the IPL's official website, the league provides a budget of $10 million in fantasy currency, using which, one can create a virtual XI, by picking batsmen, bowlers, all-rounders’ and a wicket-keeper belonging to different IPL sides. Points will be awarded for scoring runs, holding catches, effecting run-outs and taking wickets, among other performances.
Winners will be rewarded with match tickets and IPL merchandise. The fantasy team with the most points wins the league. Netizens are free to select a name, motto and an emblem for their team.

Air India Official Airline Partner Of DD, MI
Country's flag carrier airline, Air India has joined hands with the Delhi Daredevils (DD) and Mumbai Indians (MI) as their official airline partner for the sixth edition of the Indian Premier League. As per the association, the players of these two teams would be flying by Air India during the franchise-based Twenty20 league to be held at different venues of country from April 3 to May 26.

"Whenever the teams fly on our services, exclusive miniature bats bearing the autographs of the members of the respective teams will be given away to 10 lucky passengers, chosen at random through a draw of seat numbers." he said. The spokesman added that there will be at least 10 Air India flights on which each of these two teams will be travelling.

NGC To Air Documentary On IPL
The glitz and glamour of the IPL is all set to be the subject of a show on the National Geographic channel, which promises to air the unseen "inside story" of the multi-million dollar Twenty20 event. 'Inside IPL' will air on National Geographic Channel, later this year.

"IPL is more than just a cricket tournament, with hundreds of millions of people and billions of rupees being involved," says Keertan Adyanthaya, MD, National Geographic Network and Fox International Channels India. Rajeev Shukla, Chairman, IPL also said that “they are very excited to be associated with a prestigious brand like National Geographic Channel for a special series on the Pepsi Indian Premier League."

Punjab Lions Plan To Roar Loud This Year
As IPL plans to hit the bull’s eye this year, every associated team is geared up to bring out their best.  Where all the franchises are engaged in prioritizing their sponsors, the Kings XI Punjab has gathered as much as 14 sponsors for their team.

“We are very fortunate to have some of the best brands on board with us as our partners. NVD Solar, one of the leading and prestigious manufacturers of “Renewable Energy Products” (Solar) has joined hands with us as the Title Sponsor of the team for the next 3 years. In addition to this, we continue to have other reputed brands as our partners such as Lux Cozi as the Official Comfort Partners; ACC, Arise Inverters and Batteries, Raindrops Basmati, USL and McDowell’s no. 1 as Official Team Partners; Kingfisher as the Official Good Times Partner; Pavilion Sport as Official Licensing and Merchandising Partner; Noida University as the Official University Partner, Mountain Dew as the Official Beverage Partner, Meshi Creations Pvt. Ltd, as Official Entertainment Partner, 92.7 BIG FM as Official Radio Partner; Kabirz as Official Food Partner and TK Sports as Sportswear Partner,” says Arvinder Singh, COO, Kings XI Punjab.

This year they are also introducing a loyalty programme to strengthen the bond with their supporters. Other initiatives like launching a mobile application, a live in-app FanWall and an initiative with the Punjab Police to support women empowerment have also been instituted.

Game Of The Titans
As KKR and Delhi Daredevils are all set to battle it out on 3rd April’ 2013 at the Eden Gardens, fans eagerly wait to witness them in action at any cost.

According to Venky Mysore, CEO Red Chillies Entertainment, “KKR hasn’t made any changes in the price structure of their tickets for KKR Vs Delhi Daredevils match, which are nearly sold out. We secured a break even in March’ 2012, and this year we expect to grow by 25 per cent year on year.”

Red Chillies Entertainment that is co-owned by Shah Rukh Khan, also the brand ambassador of West Bengal has partnered with some of the biggies such as Nokia, Reebok, Dish TV, Pepsi.

All About Merchandising
Owners of Delhi Daredevils team, GMR Sports, are the latest group to enter the merchandising bandwagon, which will be launching its new line of exclusive merchandise along with an ecommerce site which will contain all the creative stuff for their consumers. This move is believed to add another source of revenue for the team, as well as bolster the team’s brand equity.

“We have roped in four sports personalities as flag-bearers of daredevilry. These superfans will engage with fans and we will be launching range exclusively before IPL,” says Hemant Dua, Head Marketing, GMR Sports.