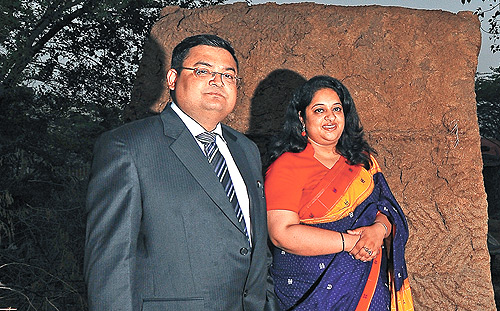 
five to 100) in the vicinity of a corporate project and undertake socio-economic development activities. It was able to sign up clients such as public sector steel maker SAIL, mining giant NMDC, and companies such as Jindal Steel, Cairn and ACC. Revenues were growing and profits were coming along at a steady clip.

The 2008-09 slowdown, however, gave the couple a bit of a jolt. "The economic slowdown, which hit mining and allied industries hard, directly affected our business projections," says Anirban Roy. Fortunately, an existing CSR client, NMDC, opened the doors to the company's entry into the financial inclusion services business. The Eureka moment happened during a presentation to the state-run mining giant, where a proposal was being considered on how to generate income by forming self-help groups (SHGs) and micro-enterprises. "The concept of SHGs was not new, but continuity and sustainability had eluded progress," says Roy.

SEED then came up with the idea of providing affordable credit facilities to the SHGs through a bank, which would make the business stable. "Thus with a view to diversify in our area of strength, which was the ability to successfully execute projects in the rural hinterland, we decided to venture into the area of financial inclusion," he says. The company had learnt quite a bit about the economic patterns of villages from its earlier CSR projects. It used this knowledge to good effect while getting into the new business. By hand-holding the SHGs, the company also helped mitigate the banks' concerns on recovery.


The Business Model
Since switching lanes to financial inclusion services, SEED's revenues and profits have grown exponentially. The company has shared the revenue and profit numbers confidentially with Businessworld.

The company makes money from banks in four different ways. First, it charges banks for enrolments of new customers, which include the filling up of account opening forms, capturing biometric data such as finger prints, and creation of smart cards linked to the account. Second, it charges a fee from the bank for each transaction that the customer undertakes after opening an account. Third, it gets a commission from the bank on the sale of various products such as fixed deposits, recurring deposits, loans and credit cards. Finally, it charges banks a fixed payout for remittances, which may vary depending on the bank from Rs 25 to Rs, 5000, and then goes on increasing with the amount. The remittances are delivered either through the core banking server network directly into the beneficiary account or  delivered through its network to the doorstep — this is where it operates as a business correspondent.

break-page-break
The technology part of the business, which   involves the smart card-based savings accounts, has been outsourced to partners such as TCS and HCL. Such outsourcing contracts are usually three-way agreements between the financial inclusion service provider, the technology vendor and the bank. SEED's top five customers in terms of revenue contribution are State Bank of India, Punjab National Bank, Bank of India, Dena Bank and Bank of Baroda.

It has a strong management team. Most members have implemented CSR projects at the grassroots level, and Roy is a hands-on CEO who looks after both strategy as well as day-to-day operations. Co-founder Romira Roy has created the human resources framework for the company. SEED currently has over 3,500 field agents and 400 employees.

Growth Plans
In addition to the 10 million accounts in 375 districts that SEED is expected to open this year, the company also needs to open 30 million more accounts in 525 districts during the calendar year 2012. This will require it to ramp up its current field workforce from 3,500 to around 8,000 beginning 2012. Based on these growth plans, the company projects revenues in financial year 2013-14 at Rs 100 crore.

The size of the financial inclusion services market, by the company's estimates, will be at Rs 17,000 crore in 3-4 years. More than half of the country's population remains outside the reach of a formal credit structure and only around 40 per cent have a bank account, says the company. In the light of the Reserve Bank of India's concern and initiatives in this area, SEED's business prospects at this stage look bright.

Once the company completes the job of opening the bank accounts (which is an RBI stipulation for banking correspondents under its financial inclusion scheme), it plans to push into products and services such as micro-insurance and micro-mutual funds. Roy estimates that it will require Rs 50-60 crore in fresh capital to push through its expansion plans, for which he is negotiating with venture capital funds.