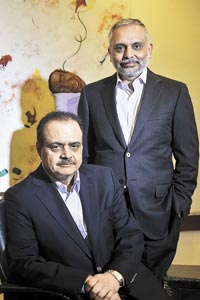 In line with the global "30 minutes or free" campaign, Domino's launched the same in India. "The 30-minute delivery format has been a big hit, which other players have not been able to replicate," says Laxmi. But ensuring the delivery is a challenge. It takes 1-2 minutes to "dress up" a pizza, another six to bake, and a further minute to pack; and 19-22 minutes to deliver. "We scientifically map out all the routes which help us figure peak hours, rush time and short cuts. The team drives on mobikes to check out the time and speed required to get to a certain point. That's how we define the lakshman-rekha around the store", explains Kaul. But such critical time constraints comes with its own challenges. "When a store gets bigger (in terms of volume of orders), we realise that the service starts to drop as well as our commitment on time, especially on weekends." On one side is the free-pizza and on the other is the experience of the customer. "We don't lose sleep over the free pizza. It is less than 1 per cent of orders. We are more concerned about the customer experience," says Kaul. As a precaution, Domino's shrinks delivery areas, and opens a new store.

India And Beyond
Earlier this year, Jubilant opened its first 90-cover outlet in Sri Lanka through a fully-owned arm, Jubilant Foodworks Lanka. In Bangladesh, it tied-up with a local partner to start operations by 2012. Kaul rules out sub-franchising, because "not all of them will be like-minded and there might be conflict of interests".

Jubilant has a busy year ahead: the first DD store will be up in the first half of 2012 and plans to have 100-120 stores over the next five years. Sehwani puts Domino's growth at 40 per cent, against industry average of 15-20 per cent.

DD holds the franchisee rights for Baskin Robbins globally. Baskin Robbins has a local presence since 1993 through Graviss Foods, which is the master-franchisee for the Saarc region. But can the Bhartias do a Domino's with DD?  "There will be synergies at all levels that we will leverage even though they will be run as two separate businesses. We might use common suppliers and logistics partners that we have been working with," says Hari Bhartia.

But listen to what Kaul says: "We are building an all-day dining as a third vertical, that's where the big bucks are. If you look at the US, beverage to food mix is 60:40, but this mix reverses outside the US. In India, the focus initially will be on food. We're spending a lot of energy on R&D. From the retail factor we'll target high-footfall areas, part will be on-the-go, and part sit-in."

Jubilant Foodworks lost rights for Starbucks to the Tata's earlier this year. "We are in infant stage of discussions with a lot of brands, but nothing has been finalised," says Kaul. He does not rule out opening Jubilant's own branded chain of restaurants. For now, Kaul is a happy man. Ask him how often he eats out a Dominos, and he says: "Almost every day."