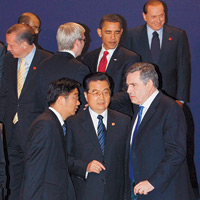 G20 is a bit of an afterthought. First came G8, consisting of the old global powers with a few close friends thrown in — the US, the UK, France, Germany, Italy, Canada and Russia. They first met in 1975 to console one another when oil-producing countries had dealt them a terrible blow by quadrupling oil prices. The chiefs of those countries enjoyed wining and dining together. The enjoyment was contagious. So it is not only the chiefs of state that meet every year, but their finance ministers, external affairs ministers, environment ministers, and whoever else can think of counterparts in the other countries to talk to. To salve their consciences after all the good time they have, the chiefs of G8 countries issue communiqués at the end, promising to solve all problems of the world from drugs to terrorism.

Powerful as they are, they cannot solve all problems of the world. Other countries have become important since 1970s, and have to be brought into the reckoning. So the G8 leaders from time to time invite leaders of another five countries — India, China, Brazil, Mexico and South Africa. These G5 meetings are not pure bonhomie; serious issues like global warming are the bread and butter of G5+8.

The G5 are a creation of the G8 in a sense; they do not meet regularly on their own. But the 13 they make up together are not considered enough when it comes to dealing with global economic issues. The first such issue was the 1998 East Asian crisis. So in 1999, the G8 had called another 25 countries. But the resulting conclave was too noisy, so the number was cut down to 22 and then 20, including, besides G5+8, Argentina, Australia, Indonesia, Saudi Arabia, South Africa and Turkey. That would make them G19, but by inviting the European Union they make it G20. The International Monetary Fund and the World Bank are also invited, and provide most of the analysis.

The global downturn that began in 2007 increased the relevance of G20. So its leaders met in November last year in Washington to discuss the financial markets and the world economy. They agreed on certain basic principles, and asked their finance ministers and central bankers to develop a global solution on their basis. They met again in April in London; and then this week in Pittsburgh.

The agenda was strictly economic; green issues, so dear to do-gooders, found no voice. No wonder that Pittsburgh was full of non-government organisations organising festivals, tent cities and demonstrations to protest against the leaders' shortsightedness and conservatism. Pittsburgh city authorities had a tough time deciding who should be allowed to gather, where and when, and to keep the milling crowds separate from the distinguished guests.

Although it would be some time before the decisions taken become public, the faultlines were well known. There were the well-known differences of opinion on the desirability of stimulus packages between their Anglo-Saxon champions, the US and UK, and the conservative Europeans, chiefly France and Germany. This controversy became less strident, however. Most major economies have stopped sinking further, though it is still unclear if there is a global upturn. The evidence of some stability reduced the urgency of further stimulus. This was good insofar as it concentrated the minds of the leaders on global financial architecture.

On the international canvas, there were divergent views on whether to reinforce the International Monetary Fund or to set up something new. The divergence goes back to the 1940s when the Fund and the Bank were set up. They were located in Washington because Europe was prostrate and the US was the world's dominant power. Times have changed since. Europe has prospered and unified; today, its economy is as large as that of the US.

But it is unlikely that this Euro-American debate can be settled without the intervention of the minor powers, especially China and India; and it would seem that neither has made up its mind to support one side or the other. China at one point expressed dissatisfaction about the US dollar and preference for a new international currency. But to be a currency, a medium must have universal acceptance, which would be very difficult to achieve for a new currency. So this idea has not advanced further.

India has been less inclined to upset the present arrangements. Many Indian civil servants return to the government with bulging purses after stints in the Fund and the Bank. So India continues to take a conservative position on institutional reform.