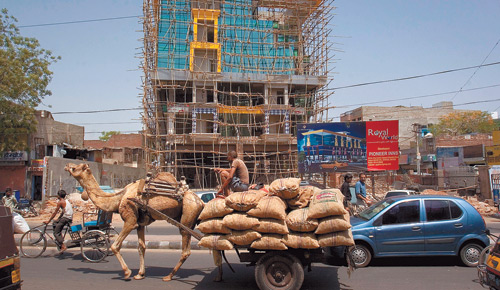 Even three centuries after Sawai Jai Singh II asked Bengali architect Vidyadhar Bhattacharya to build a modern architecture for business, Jaipur lives up to the maharaja's expectations. The pink city has evolved into a business centre of reckoning, offering a mix of traditional and modern ventures — from handicrafts and hospitality to IT and BPO.

Jaipur also boasts of a robust tourism industry. "This is what our history has taught us. We could go pink welcoming (visitors), and keep our culture with the every business deal we do," says Vikram Singh, who runs a handloom export business in the city. The government says its recent focus on micro, small and medium enterprises (SMEs) has fuelled growth. About 50 large industrial enterprises and 20,000 small-scale units operate in Jaipur. To cater to their needs, the administration has developed 19 industrial parks in and around the city.

Jaipur is growing, but its hot climate and the lack of a lucrative industrial policy hamper business development in the city. Many areas in Rajasthan lack water and electricity, according to Pradeep K. Dhingra, a Delhi-based chartered accountant. "The state government provides few incentives for big players to move in there," says Dhingra. "The government may have policies for SMEs, but it needs to come up with a clear industrial policy like Tamil Nadu and Gujarat did." A few of Dhingra's clients have business interests in the city. "The corruption level is low there, and the permission and licensing system works faster than many other Indian cities,'' adds Dhingra.

A recent study by the Ministry of Urban Development says Jaipur's slow traffic is lagging behind cities such as Bhubaneswar, Chandigarh, Patna, Nagpur and Kanpur. The report, however, says Jaipur's roads are less stressed than in many other urban pockets in the country. Still, Jaipur is way below global standards. It doesn not even an effective public transport system to reduce the rush on the roads.

About 95 per cent of the city households have electricity connections. And with a 1.78 million workforce, this erstwhile princely state is gainfully armed for further growth. Jaipur is in the pink of health.