Picking Up The Tab 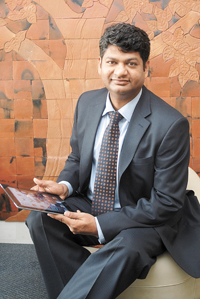 The sales force now finds it easier to generate business, because the tablets have changed the nature of the sales experience. Productivity, says Madhivanan, has increased by 15-20 per cent. Sources say the company has armed about 300 of its sales personnel with Viewsonic tablets.

While the use of tablets to sell insurance and pharmaceutical products to doctors is widely prevalent in the US and other developed markets, the concept is only now beginning to catch on in India. Several insurers such as HDFC Life and IndiaFirst Life have also started rolling out products specifically designed to be sold through gadgets with big screens and visuals.

Customer Experience
The tablet is a rich interface, letting people see their desired output, even giving them the flexibility to view multiple options at the same time, and make informed choices. As Madhivanan points out, the beauty of the tablet is that its technology is intuitive, making it a satisfying customer experience.

I-Pru has developed a software programme called Neo that explains all the products on offer with videos, interactive tools, simple calculations, and tax planning tools; the customer can assess how much of his salary he should invest in insurance, and pick a plan that best suits his family's requirements.

break-page-break
Several customers we spoke to found the idea of using a tablet to buy insurance "cool and sexy". Many of them bought the products out of curiosity and some thought that it saved them a lot of time and energy, besides being more illustrative.

The I-Pru pilot indicated that it is not just the people in large cities who bought insurance from salespersons using tablets. Thanks to the spread of the smartphone, even those at the so-called ‘bottom of the pyramid' found the tablet easy to use. One unintended consequence is the satisfaction with the reduced use of paper that seemed to resonate across all customer segments.

"When we launched the tablet on a pilot basis, we found a lot of lacunae," says Tripathy of HDFC Life. "Customer feedback has helped improve applications." Tripathy is clear that for a customer-centric business, the customer has to like it. That is the first test. And to clear it with ease, companies are spending time and money on programme development.

Many insurance executives see the tablet as a mobility device that could change the architecture of their companies. That means investing in training salespersons how to use the tablet. Being an intuitive instrument, that is usually fairly easy; it usually takes about a day's training to get sales representatives familiar with the device's capabilities.

"That kind of speed is good when the objective is to accelerate sales processes and company functionality," says Vinayak Khadye, chief technology officer at IndiaFirst Life, a joint venture formed by Bank of Baroda (44 per cent), Andhra Bank (30 per cent) and the UK's leading investment firm Legal and General, that holds 26 per cent. Khadye's company put a tablet into the hands of 100 frontline salespersons in 500 branches across India. IndiaFirst Life Insurance is currently using the Samsung Galaxy Tab; in the next financial year, it plans to equip its entire sales force of 1,500 people with the tablets.

So far, the results have been promising. Insurance companies have some of their work cut out for them. Almost every one of them is putting substantial effort into researching and designing applications that are consumer-friendly as well as easy for the sales agents to illustrate, and back offices to use.

"For the life and annuity guys, it is all about data and the tablets help the companies store loads of data," says Khadye, pointing to the tablet's ability to store and transmit content, take pictures, print copies for the customer — not all of them have email accounts — and generally accelerate ‘paperwork'.

No matter what the device, one thing seems certain: the next wave of sales teams and customers will want to see more of these gadgets. Who knows, the next time you discuss your health, it won't be about pills but it will definitely involve a tablet.