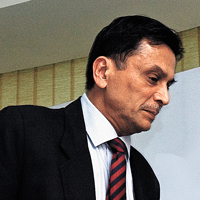 08 November, 2014
Print this article Font size -16+
Ask stockmarket folk about their opinion of Chandrasekhar Bhaskar Bhave, chairman of the Securities and Exchange Board of India (Sebi), and they will tell you he is a good engineer. He sees issues very clearly, understands the nitty-gritty very well, listens to people's opinions carefully and, like all engineers, is great at execution. They also acknowledge that the man is as straight as an arrow.

Bhave's term is up in six months, and a replacement is being looked for by the government. Among the many names floating around as his possible successor are U.K. Sinha, chairman of UTI Mutual Fund, O.P. Bhatt, chairman of the State Bank of India and K.P. Krishnan of the Economic Advisory Council.

It is also possible that Bhave might get an extension, though the chances are slim. Bhave's reputation had taken a beating because of the 2006 initial public offering (IPO) scam when he was chairman of the National Securities Depository Limited (NSDL); he was exonerated of having played any role there, and rightly so.

Bhave's tenure has been characterised by his emphasis on investor protection. He reversed the ban on participatory notes (P-notes) used by foreign institutional investors (FIIs), while at the same time ensuring that the identity of parties to transactions is clear and above board.

He also waged a battle with the Insurance Development Regulatory Authority (Irda) over the marketing of unit linked insurance plans (Ulips) by insurance companies that put Sebi and Irda at loggerheads. Sebi's position was that Ulips were more investment vehicles like mutual funds than insurance plans, and therefore, Sebi had regulatory oversight. The government had to intervene, but from his subsequent actions, it is clear that Bhave's motivations and beliefs about investor protection run deep; under his watch, Sebi maintains its stand that activities rather than entities should decide which agency should regulate Ulips.

As the search committee reviews the landscape looking for the eighth person to occupy the eighth floor at Sebi Bhavan in the Bandra-Kurla Complex in Mumbai, observers, experts and analysts believe the job needs more than an engineer. A good regulator enunciates a broad vision for the market, something most believe that past few chairmen did not display.

Second, while being a regulator involves policing, and that is as it should be, trusting the market mechanism is also necessary. As George Michael sang, "You gotta have faith." The Sebi chairman should demonstrate a degree of tolerance: you cannot impose a speed limit of 5 km per hour on a highway and keep ticketing those who drive a little fast. People give up driving altogether, and that means goodbye, innovation.

Third, good regulators bring a feel-good factor to the markets, making participants, investors and intermediaries feel good about themselves and about playing the game. Damodaran and Bajpai were famous for bringing in the fear factor; Bhave is credited with changing the rules of the game all too frequently. Too much authority, too little love.

It has been said that much bad policy is made by people in public office who are too confident in their intelligence, too convinced they know the right answer, and too willingly believe there is a regulatory answer to every problem. Picking such a person would make regulation the substitution of error by chance.