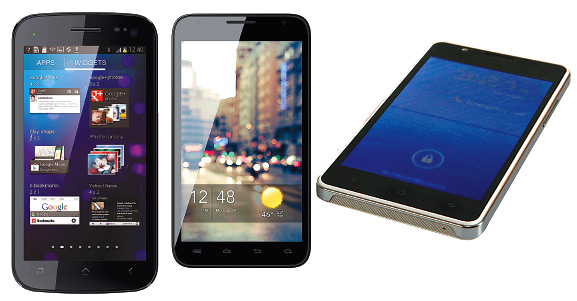 08 November, 2014
Print this article Font size -16+
What Samsung started with the Galaxy Note is threatening to become an epidemic. Few guessed that the 5-inch-or-so smartphones would become so popular. After all, they’re not that easy to carry and making calls on them is a different experience from using smaller phones. But the in-between size merged portability with screen real estate, which meant being able to do a lot on the go. With the battery life and hardware to support it — why not? Many companies have come up with their versions of the Note for around Rs 10,000. Minus the polish, minus the stylus, minus the hundreds of features— but pretty workable.
Spiced Up With Speed
The high-end feel of Spice Mi-500 Stellar Horizon quite surprised me. I had a look at the white version. The device was about the same weight as the Note II and didn’t look half bad. It was in a white flip case, which I’m told it ships with.  All around the body is a metal-like skirting and a screen that is nice and bright (480 x800 with 187 ppi density), but compromises on viewing angles. Still, browsing was super fast. If I touched the browser button accidentally, it would be up and straight into Google in less than a fraction of a second.
The processor, incidentally, is a 1 GHz dual-core. There’s 512 GB of RAM and just 4 GB online storage, some of it for your use. There’s a microSD slot for expansion up to 32 GB. The Stellar is on Ice Cream Sandwich.
You can get all the apps you want from Google Play and improve the experience of many things on the phone, such as inputting text and adding widgets.
The camera is a 5 MP and has many settings including panorama and HDR. It does have a flash. There’s a 1.3 MP secondary camera. This gadget has a good music player app and watching YouTube videos on it wasn’t bad at all. There are many pre-loaded apps, including an anti-virus app NQ Security that can be upgraded to a premium version. Inside, when you take the cover off, you see a big 2400 mAh battery which takes you through a day. The two SIMs in its neat interiors are GSMs. And all of this for Rs 12,000 or so.
Light And Easy
The Intex Aqua 5.0 also feels great to hold. It’s slimmer and lighter than the Stellar Horizon, but still has a high-end look and body. It’s easier to hold than the Note, which is 0.5 inches bigger.  The back is again white plastic (I got the white to look at) and it’s sort of ribbed diagonally. Not exactly classy, but nothing you’d be overly bothered by either. The back panel comes off with a little difficulty, but this is a minor point since you won’t be repeatedly removing it — hopefully. Seen from the front, the Aqua is much like other Android phones, only much bigger — black bezel and screen, the usual slab form and some slightly rounded edges. Along the sides, you have a metal strip. Overall it reminds me of a big Galaxy SII, a phone I’ve lived with for over a year until recently. The Aqua has a 480x800 screen that is bright and has nice colours, but less-than-perfect viewing angles, like the Stellar. There are four buttons on the bottom: home, settings, back, and search. It felt a tad slower than the Stellar when watching videos but browsing and navigation were  fast. In fact, it’s speedier than many smaller and more expensive phones we come across. Here too we have a 5 megapixel camera with LED flash and a secondary
1.3 megapixel front-facer.
The Aqua is running on Android 4.0 or ICS. We have the NQ mobile security app here too. And Flipkart, IRCTC, Nimbuzz, Skype, and more. The Aqua costs Rs 9,990.
Five-Inch Canvas
The Micromax Superfone Canvas 2 borrows a bit from Samsung’s styling. It has the shape of the Galaxy SIII, especially in white, and the name Canvas may rankle with Samsung, which positions the Note as a creativity device.
It, too, has a plastic back, but in matt finish, ensuring it doesn’t look cheap. The back peels off ever so easily. The 2000 mAh battery should last a day unless you use the screen for hours. The Canvas 2 echoes all the specs of the other two phablets except for the camera which is an 8 megapixel with a 0.3 secondary one. The settings on the main camera are ambitious with best shot, a selection of how many shots to capture, white balance settings, colour scenes, HDR and more. There’s a flash and a light sensor. The results are about the same as you’d get from a mid-range phone and not comparable to the top-end ones.
The screen is marginally brighter, at 480 x 854 pixels with 196 ppi density. The software, such as on the camera for example, on all three devices is similar. The interior battery compartment in all them is neat and looks well made. On this smartphone too, browsing and navigation are fast. Dual SIMs (mini for all), microSD card slot, etc., are the same as well.
There are pre-loaded Micromax apps and access to a Micromax store. This one is also for Rs 9,990.