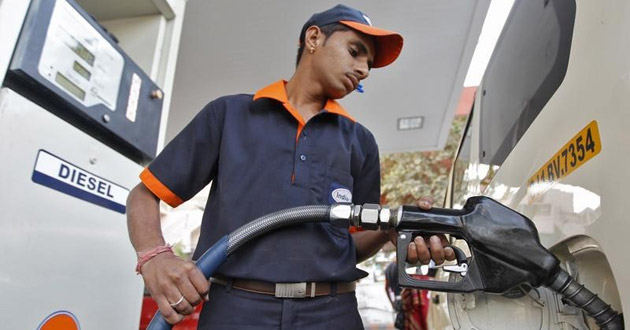 16 June, 2015
Print this article Font size -16+
Indian Oil Corp has cut the retail prices of diesel by 2.6 per cent and raise those of petrol by about 1 per cent from Tuesday, reflecting changes in global prices of the two fuels since the last revision.
The retail price of diesel prices will decline by 1.35 rupees ($0.02) and that of petrol will increase by 0.64 rupees per litre, a company statement showed.
India's three state-controlled oil companies IOC, Bharat Petroleum Corp Ltd and Hindustan Petroleum Corp Ltd tend to move the retail prices of fuels in tandem.
This is the third increase in petrol price in India since May. However, in case of diesel, the reduction has halted two consecutive increases during last month.
Petrol in Delhi will cost Rs 66.93 per litre instead of Rs 66.29 at present. A litre of diesel will cost Rs 50.93 per litre as opposed to Rs 52.28, Indian Oil, the nation's largest oil company, said.

However, on June 1, companies skipped raising rates by 30-40 paise that had become necessary due to rise in international rates.

"Since last price change, there has been an increase in international prices of petrol while international prices of Diesel have shown a downward trend. Indian rupee-US dollar exchange rate has depreciated during this period. Combined impact of these factors warrant an upward revision in prices of petrol and a downward revision in prices of diesel, the impact of which is being passed on to the consumers with this price change," Indian Oil said in a statement.

The three hikes in petrol rates have wiped away more than one-third of the gains that had accrued to consumers when global rates began to fall in August. In case of diesel, the reduction has partly restored the gains taken away in May.

IOC, Bharat Petroleum and Hindustan Petroleum revise petrol and diesel prices on 1st and 16th of every month based on average imported cost and rupee-dollar exchange rate in the previous fortnight. .
Prior to the Rs 3.13 increase in petrol price on May 16, rates of the fuel was raised by Rs 3.96 on May 1. In case of diesel, rates were hiked by Rs 2.37 (on May 1) and by Rs 2.71 (on May 16).

Petrol prices have been cumulatively cut by Rs 17.11 a litre in 10 reductions between August and February and diesel by Rs 12.96 a litre in six cuts between October and February.

"The movement of prices in international oil market and rupee-USD exchange rate shall continue to be closely monitored and developing trends of the market will be reflected in future price changes," IOC said.