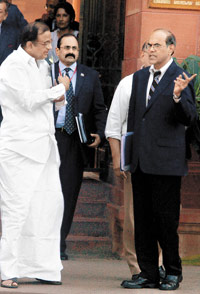 08 November, 2014
Print this article Font size -16+
It is no longer a secret that the finance minister wants new banks to be licensed to bring in competition into the industry, and that the Reserve Bank has forestalled him. It is understandable that his patience is running out. Years ago, when he first became finance minister in 2004, P. Chidambaram introduced a rural employment guarantee scheme, which involved paying villagers daily wages in cash. A large proportion of the purported wages disappeared into the pockets of gram pradhans and other intermediaries. They no doubt became ardent supporters of the ruling party; but the corruption brought it a bad name.

The government then thought of paying money into villagers’ bank accounts; but for that, banks had to spread out into the remotest corners of India. Their mollycoddled employees were not prepared to endure such hardships, so rural branches remained unmanned. Then the government thought of bank agents who were not employees. Kenya has an excellent system of money transfers that works through men of means in every village. A similar system started working in south India; but the RBI scotched it since it took away business from banks. It gave banks permission to appoint “correspondents” in villages; but banks were reluctant to appoint people in remote places on whom they had no control. So all the clever tricks to bring banks to villagers failed.

There was a simple solution, namely to give bank licences to local people; but they would have competed against existing banks, so the RBI would not countenance the solution. Having failed to find a direct solution, the government asked the RBI to license more banks. The central bank announced conditions for giving licences that were virtually impossible to meet, and issued a discussion paper, which is now so old that the discussions on it are long forgotten. In sum, the RBI has sabotaged the licensing of more banks. Whenever Chidambaram asks D. Subbarao when he will issue more licences, he says he will do so only after the government goes to Parliament and gets him power to dismiss managements of private banks, amongst other things. He knows the government is incapable of getting any legislation through, so he is pretty safe.

It would be easy but wrong to see this conflict as a personal one. Venugopal Reddy was an obedient joint secretary in the finance ministry, but after he was elevated to the top floor of the RBI’s Bombay office, he became king of all he surveyed. Subbarao is known to be an eminently reasonable man, but as governor he has been as obstructive as Reddy. The pigheadedness does not belong to the men, but comes with the office. The staff of the RBI entertains no doubts about the need to maintain the current oligopoly of government banks and the Reserve Bank’s hegemony over them; a governor can get their cooperation only if he shares the dogma. That is why even a determined finance minister such as Chidambaram cannot get him to budge an inch.

He does not have much time; at most, he has got till the next general election. Even if he gets amendments to the banking legislation through in the budget session, it is unlikely that the RBI will get through the rigmarole of approving new licensees before the election in 2014. If he is serious about changing the face of the banking industry, he needs to take quick and drastic action. It would involve kicking the governor upstairs to head a finance commission or something like that, and bringing in someone who would overcome the obstruction and make the RBI toe the line. It would not be easy to find someone who can do that. It could be C. Rangarajan, who has ruled the Reserve Bank before and is the Prime Minister’s right-hand man now. But sending him back to Bombay would require the assent of the Prime Minister, who has given no indication at all of where he stands on the standoff between the finance ministry and the Reserve Bank. It is likely that he is keeping out of the fray. He is quite good at that; and this time he has the additional reason, that he has headed both, and cannot therefore take sides. Besides, he has other preoccupations. He has kept the seat warm for so long; if the Congress does not win the next election, the not-so-young man intended for the seat may not get a chance to occupy it. A few bank licences are not going win any votes. The Prime Minister needs another vote catcher like the Mahatma Gandhi National Rural Employment Guarantee Programme. It will cost an enormous amount. That is no problem; the government can always print money. But finding an interminable name for it requires thought; no wonder the finance minister looks worried.