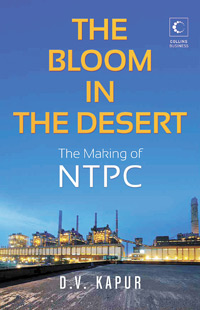 16 June, 2015
Print this article Font size -16+
The success of any business enterprise has a lot to do with the quality of its people, because it is man, and not money, material or machines, who has the ability to think, plan and execute. At the same time, human beings are also difficult to be inspired, controlled and motivated. NTPC was, therefore, single-mindedly focused on people and development of human resources right from its inception.

For an organisation destined to be the largest power utility in the country, NTPC’s manpower requirements were also very large at the managerial, supervisory and skilled workers levels.

On conservative estimates, it was believed that nearly 19,000 people, including more than 3,000 executives, would be needed over time for the corporate office, construction and operation of the four super thermal power projects as well as planning for future projects.

When approving the approach paper on organisation design, the board had also authorised me to recruit suitable personnel at all the levels whether by direct recruitment or on deputation from other public sector enterprises so as to ensure that competent technical and non-technical personnel were in position well in time for the start of construction and other operations.

Realising the necessity of setting up a core team of experienced people, who could come on board quickly to start corporate functions and other project activities, I started, within days of my taking over, looking out for highly talented individuals and getting in touch with them through personal contacts. Around twenty such persons specialising in various disciplines had either come on board or been identified by the end of 1976. NTPC poached them from the CEA, the SEBs, BHEL and other public sector undertakings like Engineers India as well as private organizations like Development Consultant Ltd and Dessein Ltd. I lost no opportunity to find out and woo people into NTPC. I found that the Maharashtra SEB had hired young engineers from the Indian institutes of technology on the promise of faster promotions.
However, it could not keep them happy and I quietly picked up two of them for NTPC. The director of the Indian Institute of Management, Ahmedabad, suggested one young man’s name and I snapped him up after an interview. None of these people gave NTPC a chance to regret having chosen them; they all played stellar roles in the building of the organisation.

Meanwhile, an intensive recruitment drive for executive positions was launched in mid-1976 through advertisements in newspapers across the country. The two-page advertisements also served as a medium to educate professionals as well as the public about NTPC and its future growth potential. The initial advertisements did not mention the number of vacancies or stipulate the length of experience required from applicants. There was a sound logic behind this. We wanted to develop a shelf of good people, since we needed to man different echelons of the organisation. Talented people who did not have the required years of experience would not have responded to the advertisements. During the interviews, we would spot talents in different people, even if they did not have the appropriate experience, and keep them on our radar even if we did not offer them a job immediately. Applicants could indicate their preference for any function at the corporate headquarters or the four project sites. What they would ultimately get, as well as the grade and emoluments, was decided after an interview. NTPC was perhaps one of the first organisations where the job description for each slot was formulated before recruitment. This job description was based on an organigram and was shared with each member of the interview panel. There was an overwhelming response to the first advertisement. In the first round of interviews, fifty executives with varying lengths of experience in different disciplines were selected. The number increased gradually and over the next three years, 355 executives joined NTPC. The interviews were conducted by an executive selection board which had been set up in order to give credibility to the selection of executives and to insulate the organisation from any external pressure. It was headed by D.C. Baijal, my former boss in BHEL, who was well-known for his integrity and principled nature.

Under his chairmanship, the executive selection board established high standards of fairness and went solely by the inherent managerial qualities NTPC expected in its executives. Once I came under immense pressure from one minister in the Janata Party government to appoint his nephew, who I knew was not suitable. I did not have the courage to tell Baijal. So Bami mentioned it to him. Baijal said we were free to call the man for the interview but he would absent himself that day. Baijal proved a wonderful shield for us in such cases.

While recruiting general managers for the four projects or in any corporate function, the board of directors decided that the selection would be done by an interview panel consisting of the chairman and managing director, two whole-time directors and at least two non-executive directors of NTPC. Here too there were several attempts to put pressure on us. Once in 1980, someone from Indira Gandhi’s office had called while interviews for general managers were on. When I returned the call after the interviews were over, this person asked that one particular person be appointed. ‘Madam has said,’ he mentioned. But the interview panel had rejected this person. I had to think on my feet. I said, in Punjabi, putting on an apologetic tone, ‘You’ve left it till it’s a bit late, I’m in an embarrassing position.’ He wanted to know why. I said we followed a system whereby as soon as the interviews are over, the minutes are written and all the members sign it. ‘The minutes have been signed and this person is not on the list. How do I manage?’ I don’t know if he believed me, but he said I shouldn’t worry and that he would speak to Madam.
break-page-break
In getting people from other public sector undertakings and SEBs, there was always the danger that NTPC would have to grapple with mindset issues, since many of them would be steeped in a culture that the organisation was determined not to replicate.

This was brought home to us in a very funny way. One of those who responded to the advertisements for executives was an assistant engineer from the Andhra Pradesh SEB. He was in charge of power distribution in the place where he was posted and thus in a position to dispense favours. He wrote in his application that he would expect a salary of Rs 1 lakh because though his current salary was only Rs 10,000 a month, his wife and children would get things for free, or at heavily discounted rates, when they went shopping. Since this would not be possible in the NTPC job, he wanted the organisation to compensate him.

Another person insisted on an assistant to attend to his phone calls. To get over this cultural problem, we organised orientation courses for all executives recruited through advertisements every few months. These were complemented with intensive training lasting between ten and twelve weeks in technological and management functions. NTPC also had to recruit executives for the future. So, an important parallel exercise was started to induct graduate engineers from the country’s premier technical institutions at junior levels. The advertisement for this also got a huge response, in tens of thousands. A team led by Suman Babbar, who had been recruited through the talent hunt and proved invaluable in many ways, took a month and a half to sift through these applications. A rigorous selection process was put in place. Applicants were short-listed through an all India written test and then interviewed by the executive selection board. This format was later extended to trainees for executive positions in the finance and HRD departments.

For first time in the history of Indian recruitment, NTPC introduced psychometric tests in selecting executive trainees. Psychometric tests involve group discussions and a role playing with psychologists observing how people respond and behave. This was, like several other personnel and HR initiatives, Hazarika’s brainwave. He had met someone from the Mumbai based National Institute of Bank Management, who had said the institute was planning to introduce this. Such an exercise was particularly useful for us, since work at NTPC would involve postings in far-flung, isolated areas where the projects were located, living in small communities and working under pressure.
I immediately okayed the idea. Hazarika then contacted the Indian Institute of Psychometry in Kolkata, a part of Indian Statistical Institute, which agreed to conduct the tests for NTPC. It was because of this rigour in the selection process that NTPC got the brightest talent from across the country.

Thirty-five executive engineer trainees were recruited in the first batch in 1976-77 and another 266 over the next three years.

The steady and efficient growth of NTPC as a world-class utility would not have been possible without contributions made by these trainees. Many of them have risen to top leadership positions not only in NTPC but in other public sector units (PSUs), leading power utilities and companies in different sectors. Over the years, the executive engineer trainee programme of NTPC has been the engineering counterpart of the annual recruitment programmes of Hindustan Lever Ltd (now Hindustan Unilever Ltd), which has been the training ground for marketing and finance professionals. Alok Roy, an executive trainee of the 1978 batch, presently chief executive of a large power company, describes his career growth published in a power magazine rather poetically—‘He is what he is today because NTPC served as nursery for him, as it has been for thousands of others. The work culture was like a creeper taking you closer to the sun so that you can flower’.

Though the engineer executive trainee programme provided the bulk of the executive cadre, this was by no means the only route to induct talent into the organisation. The practice of getting managerial talent laterally, through direct recruitment, was not given up after the initial induction through talent hunts, but continued even after the organisation had grown. But there is a tendency in many organisations where both forms of recruitment exist for the cadre-based inductees considering themselves a cut above other recruits. A prime example is the government of India where those recruited through the central services competitive examinations (Indian Administrative Service, Indian Foreign Service, Indian Police Service and so on) get an edge in postings and promotions. At NTPC, we consciously worked to avoid this kind of ‘caste system’. Once engineer executive trainees completed their training programme, they were treated on a par with other people in the organisation; only their performance and seniority mattered, not the route through which they were inducted.

The emphasis on training in NTPC was perhaps unprecedented in the public sector, with several in-house management development and training programmes being organised for different categories of employees.

With permission from HarperCollins India