Paving The Way For Street Vendors 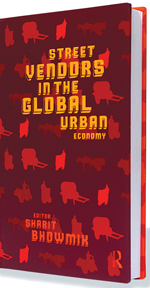 When Gariahat, a shopping hub, is cleared of hawkers, the housewives in south Kolkata go through withdrawal symptoms. They can never have enough of that packet of clothes clips or
ceramic coffee mugs. It is a win-win situation because these women, in turn, subsidise a large number of street vendors, who were refugees from erstwhile East Bengal. Nuisance or needed, street vendors — a term now globally  recognised — form a sizeable chunk of the self-employed in the unorganised sector.

Hawking as an employment avenue distinguishes urban landscapes in a developing country from a developed one, defining the two economies. A well-laid out city denotes smooth roads with no encroachments, and no visible poverty. Hence, no street vending, which comes under employment in the unorganised sector. This is something the rich nations, after waves of industrial revolutions, are not too familiar with. After the Great Depression in the US, the labour scenario became more structured. But it is only in the 1970s that ILO recognised this informal sector.

Street vending is an integral part of the urban economy in many developing nations. Therefore, the street vendor in Mumbai or Delhi may share a number of common concerns with his/her counterparts in São Paulo or Phnom Penh, where malls are gradually making roadside stalls redundant.

But again, the unskilled breadwinner, often a village migrant or a single woman, continues to sell a variety of items to both the poor and rich sections of society. This cannot be wished away overnight. For the moneyed, this translates into a choice of markets, but for the poor, this is a wonderful way to buy cheap items of clothing, food and a number of other items for daily use.

This ambitious book studies street vendors in the background of the global urban economy, that dictates the cities adhere to the standards set by developed nations — flyovers, wide roads and no encroachments, please! So, where does that put the vendor in Bangkok or a city in Africa or even in Delhi and Mumbai? Answer: in a love-hate relationship with the government authorities and the tax-paying citizens, courtesy the large portions of public space they occupy. As a Mumbai hawker tells Jonathan Shapiro Anjaria, who explores the politics of illegality in his paper on Mumbai hawkers, the garibi hatao (eliminate poverty) slogan has been replaced with garibon ko hatao (eliminate the poor).

The book is also a first attempt to contextualise the street vendor in relation to the economy in some of the Asian, African and Latin American countries. It does come as a nice surprise to learn about the major role that Self-Employed Women's Association (Sewa) played in helping vendors to get some visibility by creating the National Alliance of Street Vendors of India in 1998. Ela Bhatt, Sewa's founder, is also credited with the formation of the global alliance of street vendors, StreetNet.

Street vendors go beyond the superficial consideration of whether they are a boon or bane. The book, therefore, is an excellent compilation. We learn of the evolution of hawkers who are not always the legacy of the itinerant merchants. The chapter on street food vending in Bangkok by Narumol Nirathron is a detailed analysis. We get a peek into different types of food sold, how old items have been replaced by new ones, and the different policies related to this facet of Bangkok.

Similarly, ‘Street Trade in Latin America' covers six cities to provide an overview. Enumerating cases proves difficult, but the author, Sally Roever, examines how best the issue can be integrated within the national labour policies of countries such as Brazil and Venezuela. In Africa, the scene is no different, writes Caroline Skinner, where cleaning up cities, and retailing have caused major displacement of street vendors who have been selling a wide range of products.

Understanding the exclusion and inclusion of hawkers, licensing and permits, hawking zones and non-hawking zones; there are so many niche areas that this study on street vendors have thrown up. If vendors cannot be de-linked from urban economy, the least we can do for these self-employed individuals — who carry out their trade in the most dignified manner, in face of so many trials — is to plan better.

It is heart-breaking to sometimes witness the products sold smashed by policemen to free roads of vendors. In Delhi, the Friday market behind the Red Fort, in existence since the Mughal times, went through many ups and downs. The area is now freed off hawkers who are still to be rehabilitated — unlikely to happen before the Commonwealth Games. This time, few would have any sort of withdrawal symptoms. And that sums up the plight of street vendors in India.