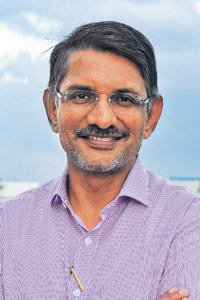 08 November, 2014
Print this article Font size -16+
Bangalore-based Sasken Communication Technologies created a buzz in the telecom market this year when it developed the IsatPhone Pro, a handheld satellite phone for Inmarsat, UK. Inmarsat, the world's biggest satcom provider, completed its first call from Hawaii and the phone was launched in June 2010. Inmarsat is now confident of building its own handset for less than $500 (its current prices are about $700), thanks to its tie-up with Sasken.

Rajiv C. Mody, chairman and CEO of Sasken, a provider of telecom software services and solutions to network equipment vendors, handset manufacturers and semiconductor companies, will now have one more reason to smile. He has bagged second position as the most ‘value'able CEO in the small companies category, thanks to some good performance over the past three years and also due to a relatively low compensation of Rs 1.47 crore.

Last fiscal, though, was not a good one for the company, which saw its revenues decrease 17.7 per cent (in rupee terms) to Rs 574.19 crore. Software services, including network engineering services, which dropped 14.7 per cent, contributed 95 per cent to the revenues, while software product revenues contributed 4 per cent. Sasken's heavy dependence on telecom business also goes against it. "The pace of telecom software is yet to pick up," says Ankita Somani, associate analyst with Angel Broking, a research firm. "Sasken would do well to go in for other verticals."

But Kiran Karnik, former president of Nasscom who was recently inducted into the Sasken Board as director, says the company is betting on future technologies and has the team to take it forward. "Its work on Android (smartphone operating system) and the satellite phone is exciting," says Karnik.

Sasken is also cashing in on the 36 patents it has in the US, India and other countries, to reinvest in research and business. "There has been a conscious effort on the part of the company to obtain a return on investment on the patents," says a company spokesperson. Sasken this year sold four patents for $450,000.

Sasken is also expanding into new areas. Recently, the company ventured into development of wireless technologies to help medical research and services. This pushed Sasken's net profits by 78.5 per cent in 2009-10 to Rs 75.52 crore and help it achieve an earnings per share of Rs 27.85 in 2009-10 as against Rs 15.17 in 2008-09. Mody is now hopeful of seeing the topline turn around as well. "We expect to see a 10 per cent growth compared to H1 of 2010-11," he says, adding that the company has identified opportunities in full phone integration and accelerating time-to-market opportunities for smartphone manufacturers using operating systems such as Android and Windows Phone 7.

The company also expects to venture in consumer electronics. "We see a fair bit of traction given our competencies in multimedia and tie-ups with semiconductor manufacturers," he says.