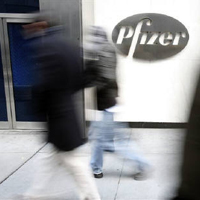 Japan's Takeda Pharmaceutical Co Ltd, Pfizer's partner on the drug, will receive 36 per cent or about $774 million from the settlement.

Pfizer won a protracted 10-year legal battle in April 2010 when a New Jersey jury ruled that Teva had infringed the Protonix patent. Teva started selling a generic version of the drug in 2007.

The patent was held by Nycomed - now a Takeda subsidiary. Protonix was licensed to Wyeth, which is now owned by Pfizer.

Israel-based Teva, the world's largest generic drugmaker, will pay $1.6 billion - half this year and the rest by October 2014. India's Sun Pharma will pay $550 million this year.

Teva said in February that it may face legal losses of up to $2.07 billion to resolve the case.

Sun Pharma set aside 5.84 billion rupees, or about $100 million, last November towards potential damages to Pfizer. The company will now have to shell out a further $450 million as final settlement.

"This is not a very positive out-of-court settlement. The agreed amount is way too high for such a settlement," said Daljeet Kohli, head of research at brokerage IndiaNivesh in Mumbai. "It will also restrict Sun's ability to look for acquisitions."