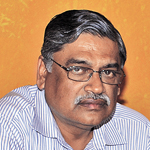 P.K. Mukherjee of Sesa Goa and Nirmal Jain of India Infoline were both debutants in the 2009 Most ‘Value'able CEO survey. That year, commodity prices and the emergence of financial services played a big role in helping them reach the top of the ranks. At Rs 1.33 crore, Mukherjee's compensation was much less than this year's Rs 1.77 crore that took him down to 18th place in the rankings among large companies. His compensation per point of performance at 0.02 was much less than the 0.09 he scored this year. Perhaps the crisis played havoc with commodity prices, and lowered his score. Other issues with the Vedanta Group have also had an impact on his company; most recently, his attempt to buy Cairn Energy seems to have hit a roadblock.

Nirmal Jain in many ways was the surprise of last year's rankings; it was unusual for a broking firm to beat the best and the brightest among the financial services companies to rank at No. 2. But despite the continued run of financial services, this year, he was pushed down to No. 17 among small companies. But his score of 0.04 in compensation per point was not too far a fall from his 0.03 in 2009. It was definitely better than Mukherjee's fall. His fifth out of 12 in the sectoral rankings seems marginally better than Mukherjee's 15th out of 33. He plans to expand his securities and research business beyond our shores, to Colombo and Singapore, where the company will do what it has been best at: broking services, research and building a new portfolio of clients.

Rana Kapoor of Yes Bank has held steady, maintaining his position at No. 3, and even improving it marginally among mid-size company CEOs. In 2010, he is third overall, the same ranking as he had in 2009. From 0.033 last year, his compensation per point this year is 0.026, and compares very well with his contemporaries. His compensation hasn't moved too much either, from Rs 1.17 crore in 2009 to Rs 1.26 crore in 2010. But he has ridden the crest of the financial services wave to stay where he is: near the top of the heap. Now, he is rolling out what he calls Version 2.0 of his bank, with some large ambitions: becoming the best bank in India by 2015, which can be a tough call given the nature of the competition he faces. Like US President Barack Obama, he thinks, yes, he can.

Dilip Shanghvi, chairman of Sun Pharmaceuticals, was listed as the most ‘value'able CEO in the 2008 edition of this survey, when pharmaceutical companies were the flavour of the investing public. The controlling interest in Ranbaxy had been sold for what at that time was a phenomenal sum of over $2.9 billion; the knock-on effects were to drive the valuations of Indian pharma companies to near stratospheric levels. He was also in an expansionist phase, looking to buy up Taro Pharma, an Israeli drug company. Of course, it took almost four years to close the deal; one of the biggest generics companies in Israel battled with Shanghvi for control of Taro. That battle also took some steam out of Sun Pharma; this year, he's dropped to No.10, after moving down to No. 4 last year.

Glenn Saldanha of Glenmark came in second to Shanghvi in what ended up being the race for the No. 1 spot between two pharma companies in the inaugural edition of the Most ‘Value'able CEO survey. The next year, Saldanha dropped to No. 26, perhaps also heralding pharma's fall from grace. In 2009, his company had seven molecules in various stages of testing; it might be some time before there's a payoff. But, this year, he did better than Shanghvi in scoring 0.044 in comensation per point, compared to Shanghvi's 0.068. In the sectoral rankings, he ranked fourth compared to Shanghvi's sixth place position. His compensation at Rs 1.82 crore rose less (by roughly Rs 8 lakh) than Shanghvi, who went from Rs 1.14 crore to over 1.5 crore.