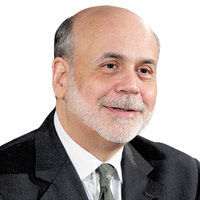 08 November, 2014
Print this article Font size -16+
US Federal Reserve chairman Ben Bernanke said the Fed would maintain an ultra-easy US monetary policy for as long as needed and would only begin to taper bond buying once it was assured that labour market improvements would continue. Bernanke also said that while the economy had made significant progress, it was still far from where officials wanted it to be. Agreeing with his successor Janet Yellen’s testimony, Bernanke said, “The surest path to a more normal approach to monetary policy is to do all we can today to promote a more robust recovery.” The Fed has held interest rates near zero since late 2008 and quadrupled its balance sheet to $3.9 trillion through bond buying.

Atonement
JPMorgan finally agreed to a $13-billion settlement with the US government on charges that the bank overstated the quality of mortgages it was selling to investors in the run-up to the financial crisis. The justice department trumpeted its settlement as a big step towards holding banks accountable for their behaviour before the financial crisis. The misdeeds that the largest US bank admitted to, authorities said, are at the heart of what inflated the housing bubble: lenders making bad mortgages and selling them to investors who thought they were relatively safe.

Building Up
Yahoo said it had increased its share repurchase authorisation by $5 billion and that it planned to offer $1 billion in convertible notes. Yahoo has aggressively repurchased its common stock in recent quarters, using cash obtained from selling a portion of its stake in Chinese e-commerce giant Alibaba. In the first nine months of 2013, Yahoo spent $3.1 billion on share buybacks, which helped boost its scrip by around 74 per cent, even as the Web portal’s revenue growth has remained stagnant amid competition from Facebook, Google and Twitter.

Emerging Worry
Slowing emerging markets are a drag on the world’s economic recovery and advanced countries are struggling to pick up the slack after years of debt crises, the Organisation for Economic Cooperation and Development (OECD) said, trimming its global growth forecast. In its latest snapshot of economic activity, OECD forecast that the world economy would grow 3.6 per cent next year. Though an improvement from the 2.7 per cent expected for 2013, it was not as fast as the 4 per cent estimated for 2014 in its last twice-yearly Economic Outlook  in May. The primary reason cited was the downgrade in growth in the emerging countries, hit by capital outflows triggered by the US Fed’s plans to rein in its exceptional monetary stimulus, and the inability of the advanced economies to make up for it.

Handle With Care
There is no risk of deflation visible in the euro zone economy but its recovery is fragile with inflation low and credit subdued, said a European Central Bank (ECB) board member during a presentation in Frankfurt. The ECB cut interest rates to a record low in November and said it could take them lower still to prevent the euro zone’s recovery from stalling after inflation tumbled to 0.7 per cent — well below its target of just under 2 per cent. The member, Peter Praet, said inflation in the euro zone is low but inflation expectations solidly anchored. A cyclical upswing in the euro area “is confirmed... Things are improving, but it is still a fragile environment”, he added.

Good News
A surge in car shipments spurred Japanese exports to their biggest annual increase in three years in October, suggesting that a gradual pick-up in global demand will help underwrite a recovery in the world’s third largest economy. The 18.6 per cent increase in exports in the year till October was an acceleration from the 11.5 per cent gain till September, according to finance ministry data. Recovering demand for Japanese goods would also help address another concern — persistent red ink in the trade balance.

Clean-Up Act
China will steer local governments away from the pursuit of economic growth at all costs and beef up their powers to punish polluters in order to reverse the damage done by three decades of unchecked expansion. In its recent wide-ranging economic and social reforms, the ruling party said it would put more emphasis on environmental protection, and also hold local authorities responsible for pollution. It also pledged to relax its ‘one-child’ policy.

Free Float?
With a shift in tone and language, China’s central bank governor has dangled the prospect of speeding up currency reform and giving markets more room to set the yuan’s exchange rate as he underlines broader plans for sweeping economic change. The People’s Bank of China under Zhou Xiaochuan has consistently flagged its intention to liberalise financial markets and allow the yuan to trade more freely, even before the Communist Party’s top brass recently unveiled the boldest set of economic and social reforms in nearly three decades.

Smart Marketing
Samsung Electronics said its Galaxy Gear has become the world’s most popular smartwatch with sales touching 800,000 units since its debut two months ago, defying market concerns that the accessory will fail due to a lack of compelling features. The South Korean firm said Gear sales have been better than its own expectations and it will expand promotions for the wearable device for the crucial year-end holiday sales. Samsung intends to step up Gear sales by expanding the number of mobile devices that work with it.